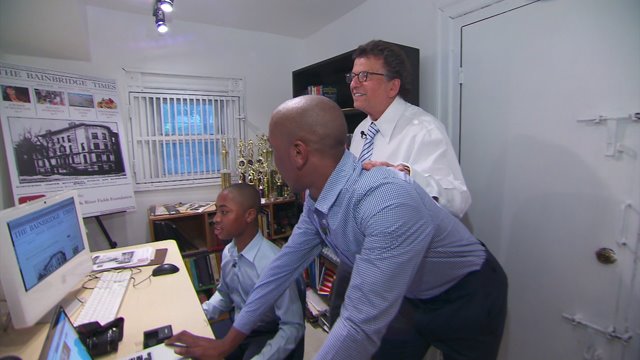 In this week`s It`s a "G" Thing, Mr. G sits down with Rusty and River Fields to talk about the original newspaper they`ve created

“Who’s the better looking of you two?" I asked Rusty and River Fields. "I am," River replied.

Just a little sibling rivalry between Rusty and River Fields.

“Who’s more humble?" I asked. "I think we’re both pretty humble,” they said.

The two brothers have had each other’s backs since birth, literally.

“I was two years and nine months [when I helped deliver River during birth]," Rusty remembered.

The 17-and-14-year-olds have always strived for excellence.

“We used to do karate, and in that I got my black belt when I was 10," Rusty said. "I started fencing when I was eight and I actually won the national championship for my age division."

They both also played competitive tennis, all of which taught them quite a bit about life.

“It taught us discipline, it also taught us order, because we had to be prepared for our tournaments mentally and physically,” River described.

Now they’re bringing that dedication to Brooklyn, helping connect the community through The Bainbridge Times newspaper.

"It was supposed to be a one-page newsletter for the neighborhood and then it just turned into a 12 page paper," Rusty said.

Rusty and River aim to tell stories people will care about and benefit from.

"Right now, it’s free but we are gradually moving towards maybe putting it to a price,” River said.

They will probably keep the publication online, as they found out, this stuff is expensive!

"We will still have some [papers] for people who are not really tech savvy,” River added.

They also have a foundation, The Rusty and River Foundation, to keep kids reading.

“We had a literacy program where we had children come in and we would help them to practice reading,” Rusty said.

Rusty and River plan on becoming neurosurgeons, and hope to attend Harvard.

These teens have achieved a lot for their age but know they’ve couldn’t have done it alone.

“Our parents have really given us the freedom to try a lot of stuff and our entire family, they support us and encourage us,” Rusty smiled.

And I’d say the future looks pretty bright for these brothers!