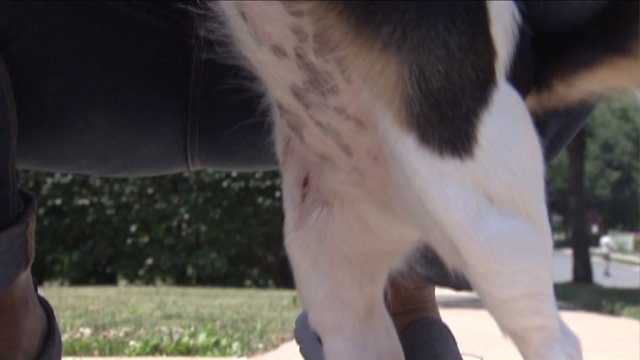 HASBROUCK HEIGHTS, N.J. — Residents in a New Jersey town are urged to be on the lookout for rabid raccoons that have been terrorizing the neighborhood in recent days.

Just a few days ago, Chis and Carol Onorato let their 2-year-old beagle mix Sophie out into the backyard. A few minutes later, a raccoon came out of no where, in the daylight, and attacked the dog.

"It had a grip on the leg," Chris Onorato recalled. "I had a fight with the raccoon, kicked it and stepped on it."

His wife, Carol, threw an umbrella off the deck to help fight off the raccoon, which finally let go of Sophie. Chris then took a bucket and placed it on top of the raccoon while they waited for the Bergen County Animal Control to show up.

But Animal Control arrived and the employee tried to get the raccoon into a cage, the animal bit her and ran off.

There have been a number of attacks: two on dogs and two on humans.

Animal Control said they are urging those with small pets to be on alert. They also want to make sure every pet has received a rabies vaccine.

They are offering free rabies vaccines at their Teterboro location. For more information, click here.