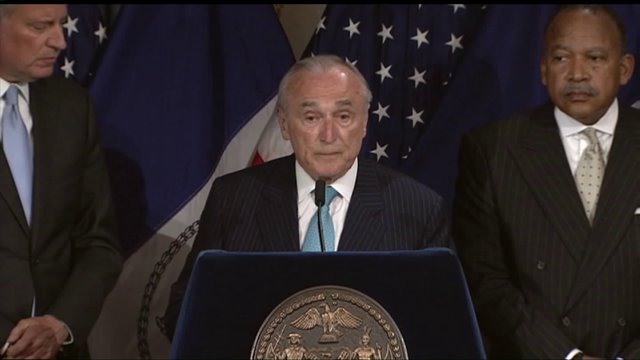 In an interview with AM 970's John Catsimatidis, Bratton said that despite an increase in the number of mass shooting events in recent years, the NYPD is equipped and trained to respond to an active shooter situation in a matter of minutes.

"The reality is, what happened there [in Orlando] is occurring much more frequently, at a much more rapid pace than at any time in our history," Bratton said.

Bratton also said the NYPD is "very prepared" for the New York City Pride March on June 26. This year, the parade is expected to be even larger than it typically is, and Bratton said security will be significantly increased, along with crowd management and control.

"We are intending to ensure that people can come in and have a good time," Bratton said.

"In New York, we celebrate difference," he said. "We celebrate all the different people that live in the city and we intend to protect each and every one of them.

Citing the NYPD's extensive research on mass shootings and terrorist attacks, Bratton said that most casualties during an attack occur within the first five to seven minutes. It is this time frame that has guided the NYPD in training new groups of officers specially equipped to stop an attack.

"What we've attempted to do here in New York is have sufficient resources around the city with this equipment — long guns, tactical gear — that within five to seven minutes, I can have a significant number of officers anywhere in the city to go in and confront the attacker," Bratton said.

These officers, Bratton said, would belong to one of two new units: a 550 person Critical Response Command and an 800 officer unit that has been similarly trained. The officers are highly trained and use specialized vehicles, long guns, ballistic helmets and heavy vests that offer more protection than a standard vest.

Officers from this command can usually be seen standing outside tourist attractions, consulates and embassies throughout the city.

In the instance of an attack, Bratton said the idea is that precinct officers will be the first to respond, but that he has the ability to have these specially trained officers respond quickly.

"It's a capability no other city in America has at this time, and we're fortunate we've been so well funded, we've expanded our department," Bratton said. "But it's necessary because we remain, we believe, the number one terrorist target in this country, if indeed not in the world."

Bratton said that his relationship with Mayor Bill de Blasio has contributed to the NYPD's ability to create, train and equip these types of special units. Bratton said the department has been well-funded and last year, began hiring hundreds of additional officers to bring the total to approximately 35,000.