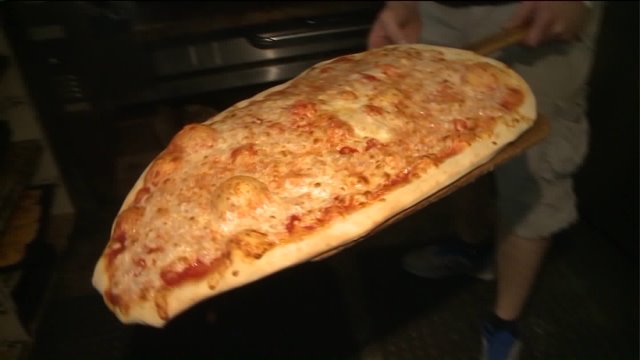 YONKERS, N.Y. — New Yorkers sure love their pizza, so much that one pizzeria has created the "super slice."

Pizza Barn on McClean Avenue in Yonkers created a two-foot-long slice of pizza for its customers. The pizzeria announced the created on its Facebook page on June 2, calling it "the BIGGEST slice in YONKERS."

Owner Angelo DeLuca told PIX11 News he was looking for a new way to present one of New York's favorite food.

"I was thinking I wanted to do something different. Something bigger," DeLuca said.

"I researched a little bit. They got big pies, everyone has big pies."

But when DeLuca searched for big slices, he found decent sized ones, but nothing spectacular.

"I wanted to create something bigger, tastes better," DeLuca said.

Thus, the super slice was born.

The super slice has become a trending food, with pizza lovers lining up for more than an hour just to get a bite. Each one costs $10.

"Don't you see the size of that big monster? Who wouldn't come for that?" a customer said.

Seems like the ideal way to eat the pizza is by picking up the whole plate or using a knife and fork. Folding the slice is not advised.