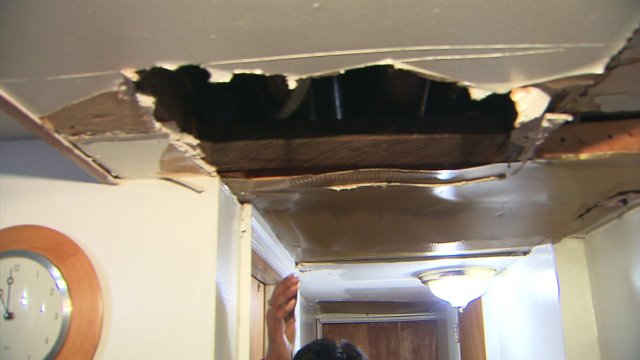 JAMAICA, Queens — Dorothy Singh lives in a two-family home she owns on Waltham Street and 97th Avenue in Jamaica, Queens.

It’s always been a residential neighborhood, but recently, construction of a hotel began on the corner lot.

The residents checked with their local community board, Community Board 12, and learned zoning regulations do permit the construction of the hotel.

She showed us the large holes in the ceiling and some walls; the cracks in the glass cabinetry and the floors and the bricks that have fallen from the roof.

Dorothy says she has complained to the workers, but says they claim not to speak English.

However, she has not called the complaint numbers posted on the construction fence by the contractor, Triboro Construction Services, and the hotel owner, Waltham Hotel.

So PIX11 contacted them and they denied being responsible for any damage to Dorothy’s home.

We then contacted the NYC Department of Buildings.  The DOB sent out an inspection team and as a result of their findings,  they issued a partial Stop Work Order.

The DOB cited the contractor for:
1.    Performing construction with temporary permits that expired on May 7th.
2.    Failure to protect adjacent properties during excavation operations.
3.    Failure to submit excavation monitoring reports to the Department.

The DOB tells PIX11 “We will continue to monitor this site closely.”