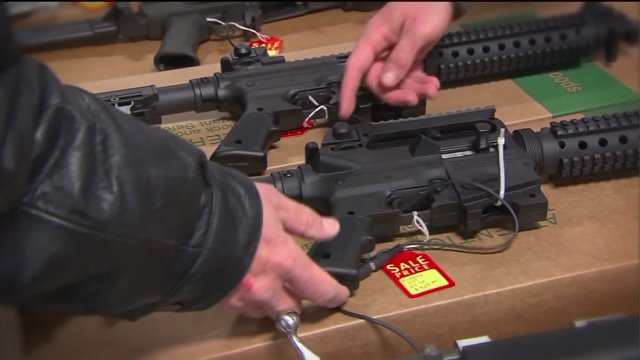 Semiautomatic rifles have been linked to several deadly mass shootings in recent years. These weapons can quickly fire rounds of ammunition in short period of time with high accuracy.

In December 2012, Adam Lanza entered Sandy Hook Elementary School with an AR-15 and opened fire, killing 20 children and six adults. Sandy Hook victims' families later filed a wrongful death lawsuit against Remington, the manufacturer of the AR-15 semiautomatic rifle. They said Remington is responsible in large part because of the way they market the weapon.

"[Lanza] chose the AR-15 because he was aware of how many shots it could get out," said Nicole Hockley, who lost her son Dylan in that shooting.

In this photo illustration, a Rock River Arms AR-15 rifle is seen with ammunition. The weapon is similar in style to the Bushmaster AR-15 rifle that was used during a massacre at an elementary school in Newtown, Connecticut. (Joe Raedle/Getty Images)

Assault-type rifles like the AR-15 have long been the subject of hot debate. The weapons were banned from 1994 to 2004 under federal law. When the ban expired, the weapons became a popular choice among gun owners.

One reason is the appeal they have for young men, fueled by enticing ads from gun manufacturers.

Joshua Koskoff, a lawyer during the Sandy Hook lawsuit, said during the suit pre-hearing that Bushmaster, an AR-15 manufacturer, has ads that specifically target young men with slogans like "Consider Your Man Card Reissued."

Koskoff also pointed out that the Bushmaster AR-15 is specifically promoted by the gun manufacturer in video games like "Call of Duty," and that accurate methods of loading and using the gun are depicted in the game.

The argument on whether assault-type rifles should be banned will only increase after the Orlando massacre.  In 2004, Congress did not renew the ban because it found no evidence that it reduced gun violence.

Seven states, including Connecticut, New York and New Jersey, have bans on assault weapons. However, gun manufacturers have redesigned the rifles to comply with laws.

Walmart announced last August it would stop selling military-style semiautomatic rifles at all locations. A spokesman for the company said the move was done because of slumping demand.

The announcement, though, came the same day two TV journalists were shot and killed during a live broadcast.

Mateen, of St. Lucie, Fla., opened fire at the gay club Pulse about 2 a.m. There were more than 300 people inside at the time, officials said, when Mateen, using the assault rifle with unknown rounds, launching the deadliest mass shooting in U.S. history. Mateen also was carrying a handgun.