‘Gentrifiers Anonymous’ calls on NYC settlers to confess their sins 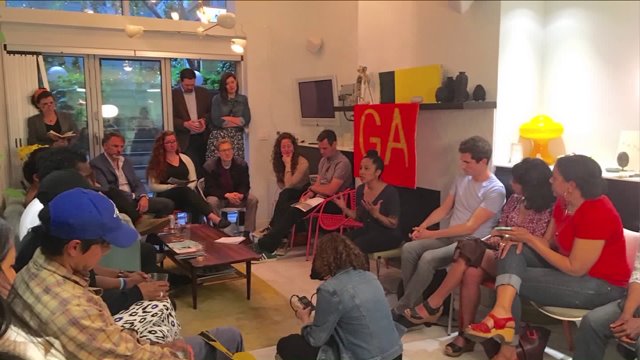 NEW YORK — It has all the elements of an Alcoholics Anonymous meeting or even an intervention: it’s called Gentrifiers Anonymous, a social gathering where participants of all races, genders and economic backgrounds come forward to confess their sins of gentrification.

Whether big or small, they open up on their contribution to the citywide epidemic that's pushing out longtime residents from their neighborhoods only to be replaced by wealthier, younger residents.

The project was commissioned by Crown Heights residents Mildred Beltre and Oasa DuVerney. The idea, according to them, was to have an uncomfortable discussion that was not being had.

“I guess our goal was for people to walk away thinking more about what they do,” DuVerney told PIX11 News. “Thinking more about things that maybe are more subconscious and kind of bringing it up to the surface.”

It was a blunt discussion and participants were very much judged.

“I think it was a really good moment of people being pretty honest and I think having a conversation we don’t have spaces to have,” Beltre said.

The community advocates gave out pamphlets encouraging others to practice proper neighborhood etiquette. It’s something they say typically gets thrown out the window with new settlers.

“We’ve been here for a while and we say hello to our neighbors,” Beltre said. “But we see people who walk by here all the time and don’t even raise their heads or look up from their phones to acknowledge that they’re passing by a person.”

RJ Maccani, who moved to Brooklyn 14 years ago, attended the meeting earlier this month, saying it was truly beneficial.

“So I got some perspective how I fit into the picture,” he said. “I got some information on how I could be part of addressing the negative impacts of gentrification.”