It’s a ‘G’ Thing: Two-time leukemia survivor gives back to others through own foundation 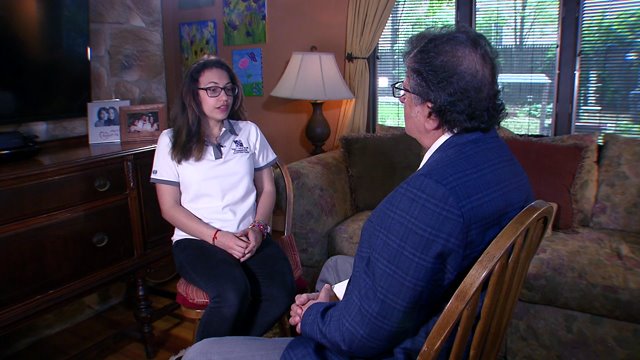 In this week`s It`s a `G` Thing, Mr. G meets Carly Nieves, who beat leukemia twice, but now she`s helping to give back to others

“It takes a lot for me to kind of call it quits,” Carly Nieves said.

“I’ve got to pick myself up and I have to push through this,” she said.

An attitude, this soft-spoken 20-year-old developed after a lifetime of pushing back.

“The first time I was diagnosed with Acute Lymphoblastic Leukemia, I was seven years old,” she remembered.

She went through a grueling two and half years of treatment before going into remission. But, then another setback.

“I came to the realization like oh my goodness this is happening again," Carly said.

This time Carly was 12 and she had to fight harder than ever.

“After a certain amount of time, it just becomes your normal so you don’t think much about it," she said. “Did you ever feel sorry for yourself?" I asked. "No.”

But this battle was different, partly due to the special bond she formed with her doctor, Jonathan Fish.

“His personality, his aura, whatever you want to call it, is very comforting,” she described. "When he would walk in the room, there was just a sense of relief, that everything was going to be okay."

“In order for them to heal from their life-threatening illness, it requires having a therapeutic relationship, having them trust you,” Dr. Fish explained.

A pediatric oncologist at Cohen Children's Medical Center, he helps heal hundreds of kids every year.

“Carly is exceptionally good at tackling life and I wish I could say that I could take some credit for that but the reality was entirely just Carly saying this is what I’m going to do now," he smiled.

It's been five years since Carly beat cancer, but she continues to stay in touch with Dr. Fish and other hospital staff.

“I send him updates sometimes, like how I’m doing in school or if I have any questions," Carly said. "They are the nicest people you never want to meet, we like to say.”

The high doses of chemotherapy caused some permanent side effects.

“I have something called Raynaud’s Syndrome or Raynaud's Phenomenon, which is where my hands and my feet get extremely cold,” she described. “Math and science was always very difficult for me to comprehend.”

But it hasn't stopped her from going to college, even making the Dean's List.

“My major in college is commercial photography and I would love to be able to freelance my photography at some point in the future,” she smiled.

Carly sees the world through a different lens than most, and now, what's in the picture is all about giving back through the Carly Rose Foundation.