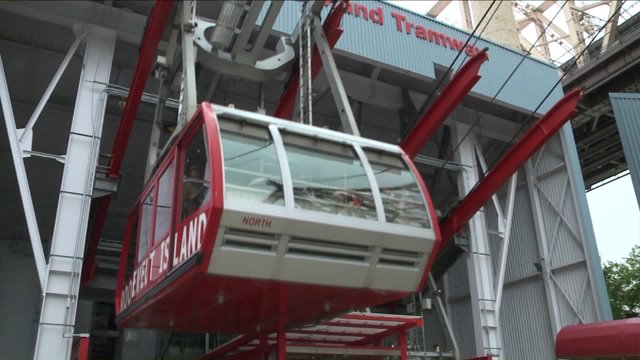 It's an innovative alternative to other forms of public transportation, whose time, many say, is ripe.  That description applies to both the Roosevelt Island tramway and the East River Skyway.

The former is the most prominent mode of transportation to Roosevelt Island, which celebrated 40 years of service on Tuesday; the latter is a proposed aerial gondola system that would initially run between Williamsburg, Brooklyn and the Lower East Side, before expanding to Queens as well.

The East River Skyway is still in its planning stages, where it's been for the last two years, but now, thanks in part to the scheduled maintenance shutdown of key sections of the L subway train for up to two years, starting in 2019, the skyway is attracting new interest.

"As [the Roosevelt Island tramway is] celebrating its 40th anniversary," said Dan Levy, creator of the skyway, "we in the city need to be looking at how we can do more of these."

Levy is the CEO of the website CityRealty.com, and a big civic booster.  He's also a skier who, at a resort in Chamonix, France, was inspired by the ski lift gondola there to create an enclosed glass gondola system for New York.

Similar systems are in place or under construction in London, England, Portland, Oregon and  Austin, Texas as well as in a variety of South American cities, including
Caracas, Venezuela, Rio de Janeiro, Brazil and Santiago, Chile.

Before a community birthday celebration for the Roosevelt Island tramway began on Tuesday, PIX11 rode the tram with some of the tramway system's designers and builders.  They pointed out that, despite one collision between the tram and a station wall in 1989 and despite it getting stuck in midair for 11 hours in 2006, it's by far the safest mode of public transportation in the city.

"We picked the best system," said Richard Tomasetti, the chief engineer and one of the designers of the tramway, "which was actually more expensive than most of the other bids that came in."

As a result, the only other times a Roosevelt Island tram car has faced notable danger were when a construction crane from the Ed Koch Queensboro Bridge adjacent to it toppled over onto a car in 1999 as well as in nearly a dozen movies.  From the remake of King Kong in 1976 to Spider-Man in 2002, the tram has been in great danger, albeit fictional.

The origins of the four decade-old tram closely resemble those of the proposed East River Skyway.

The tram was built because the subway to the island was not going to be in operation in time to serve new apartment residents there in the early 1970s. Its designer was a skier, who was inspired by ski resort gondolas, much the same way Dan Levy of the East Side Skyway was.

His skyway is a gondola -- different from the tram in that it has dozens of cars, rather than just the two on the tram.  That way, there's service every thirty seconds or so.

Levy pointed out the other similarity between his project and the tramway.  "The  partial closure of the L train will be quite detrimental to Northern Brooklyn," he said in a telephone interview from Montreal, where he's on a business trip.  "Our project is one of the few projects that can be in place in time for the 2019 shutdown."

He said that the skyway would not be so different from London's aerial gondola, which went from groundbreaking to operation in 18 months.

Some L train riders expressed cautious support. "Well, it's not a bad idea," said Chanette Manso, who added some notes of skepticism.  "I don't know if it's complete" in its planning, she said.

The skyway would be built in phases, eventually extending from just one route between Williamsburg and the Lower East Side to a network extending from as far south as Dumbo to as far north as the Cornell-Technion university campus under construction, interestingly, right next to the Roosevelt Island tram.

Agreeing with him were Wes and Jennifer Hansen.  They got married last December on board the Roosevelt Island tram, and said they favor an additional aerial transport in the city.

"I think that any alternatives you can have in public transportation is a great thing," Wes Hansen said.