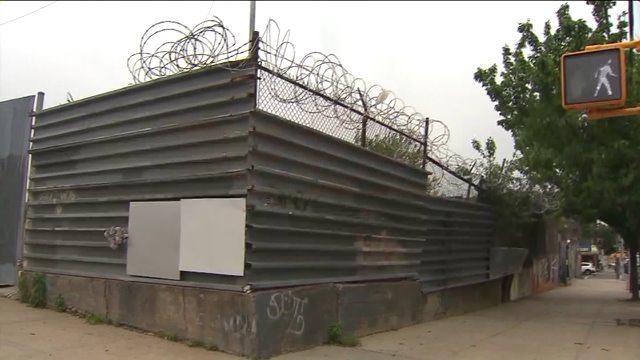 RIDGEWOOD, Queens — Life's not a beach for everyone. Residents in Ridgewood, Queens are upset about an urban pop-up beach set to open in June and stay open all summer.

The site on Woodward Avenue is a vacant 5,000-square-foot lot with sweeping views of the Manhattan skyline.

An 86 year-old-man who does not want to be identified, told PIX11, "get rid of it before they even make it, they should not put in up!"

He's lived in the neighborhood for 66 years and says he's concerned about the noise from the pop-up beach affecting quality of life.

Concerned neighbors have circulated a petition, trying to gain support to stop La Playa from opening. They cited traffic, congestion, noise, alcohol consumption and pollution from smoking in the area.

According to the Queens Community Board 5 District Manager, Rockaway Brewing Company has secured an approval from the liquor authority.

It's still up to the Building Department to sign off on final approval but the lot is zoned for commercial use.

"It seems like they can legally do what they're saying they wanna do. We continue to pursue whether there are any loopholes in the community in preventing this," said Gary Giordano.

"This could be fun for a lot of people coming here but if you're living right by it, it's probably not going to be much fun for you," adds Giordano.

We did find one area resident in favor of the beach. "James" lives two blocks from the site. He's lived here for over 25 years.

"I think it's a fabulous idea," he says. "A beach is fine, you'll get a lot of sunlight, local businesses will make more money, bring more money to the community. A beach is good." James even adds "Hopefully it will have volleyball courts too!"

District Manager Giordano says Rockaway Brewing Company has a farm brewer's license that permits them to have 5 satellite locations.

At the Woodward Avenue site, they will serve only beer and cider at the beach bar. No hard liquor and no food. The maximum capacity is 75 people. 140 cubic yards of sand will be trucked in.

"The owners seem like they want to be respectful to the neighborhood, even though their idea seems quite out there and inventive," said Giordano.

The lease for the pop-up beach is expected to run from June through September. In September, the owners of the lot will break ground, as planned, on a new residential building that will have affordable housing units.

PIX11 reached out to Rockaway Brewing Company. At air time, we have not heard back.