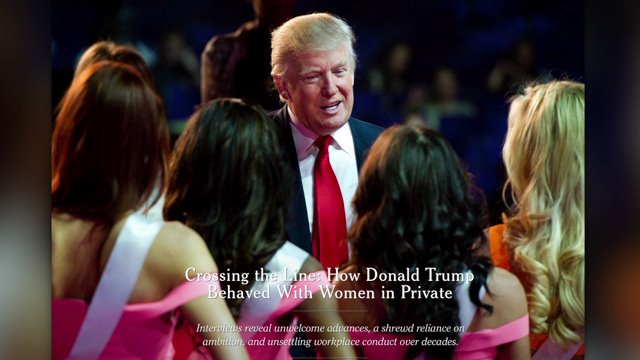 The Times interviewed dozens of women, who either worked with Trump, dated Trump or socially interacted with him. While some credited the presumptive Republican nominee with guiding their careers and helping them succeed, others painted a much darker picture. One of a man who did things many would describe as sexual harassment.

According to the Times, “Their accounts — many relayed here in their own words — reveal unwelcome romantic advances, unending commentary on the female form, a shrewd reliance on ambitious women, and unsettling workplace conduct, according to the interviews, as well as court records and written recollections.”

Donald Trump responded on Twitter Sunday morning. His first tweet at 6:55 a.m. said, “The failing @nytimes wrote yet another hit piece on me. All are impressed with how nicely I have treated women, they found nothing. A joke!”

Throughout the day Trump would tweet about the in-depth investigation titled, “Crossing the Line: How Donald Trump Behaved With Women in Private.”

According to the New York Times, Trump described himself as a champion of women. “…someone who took pride in hiring them and was in awe of their work ethic.”

Louise Sunshine worked for Donald Trump in the 1970’s. She defended him Sunday. “He was a leader, he taught me. He mentored me, he showed me the way.”

New Yorker Tosh Barron disagreed with that assessment. “What can I say? He is a sick puppy who needs a lot of help.”