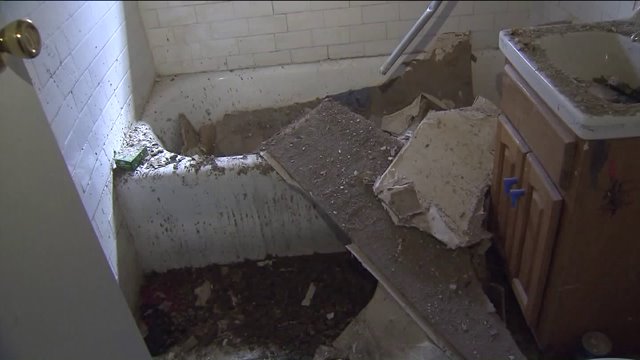 HIGHBRIDGE, The Bronx — Residents in a Bronx apartment building say it's like living in a house of horror.

The apartment, located at 1055 University Ave., in the Highbridge section of the Bronx, has severe structural problems.

The ceiling in the bathroom collapsed, water is streaming down the walls and trash is piling up, making it nearly impossible to escape in an emergency.

"It's the worst thing in my life," one resident told PIX11. "It's terrible, the walls are barely standing, black mold everywhere."

Its a building mixed with a number of residents some under government services and some paying full rent.

Residents say it's obvious the building has a structure problem, along with they say mounds of trash regularly blocking exits.  A hazard they feel if an emergency happens.

"311 has been out here many time," said one resident. "The kitchen cabinet had fallen on me not to long after I got in here."

PIX11 tried talking to the building superintendent, but he refused to give any answers on camera.