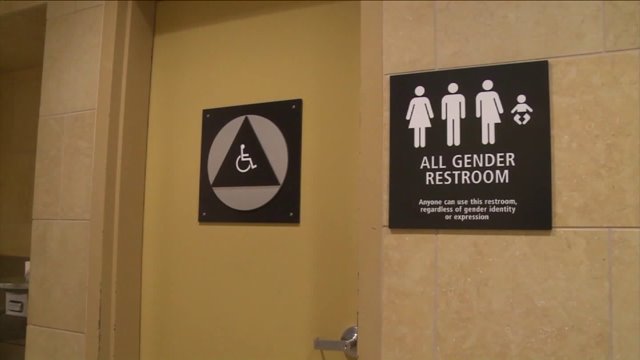 "I always wanted to be a male growing up, but my mom didn't want me to," said Christina Rainey.

Rainey is a transgender man. He was born female, but identifies as male.

Rainey grew up going to New York public schools and knows the awkwardness of feeling you're using the wrong bathroom first hand.

"Even when I walk past the bathrooms always I want to use the guys bathroom. It's just like something comfortable with using the men's bathroom."

Which is why he supports President Obama's decree calling for public schools to let transgender students to use the bathroom of his or her choice.

"I think this argument of gender neutral bathrooms for children is way overdue," said Floyd Rumohr. "I don't know why we separate them in the first place."

Rumohr is the executive director of the Brooklyn Community Pride Center. He says the President's support for transgender community will help many people who struggled with their identity because they've felt neglected in the past.

"Whenever anyone of power or authority speaks out in favor or support of those who have felt invisible prior, it has a huge emotional impact," he said.

"No one, especially a child, should be denied a bathroom when she or he needs one," said McCray. "Growing up is already tough. No child should face humiliation and embarrassment because of their gender identity, especially during such a private moment. In New York City, it is our policy that schools allow students to use the restroom that matches their gender identity so all students feel safe and welcome.”

But Rainey says just saying a transgender person can use the bathroom of their choice doesn't make them feel welcome.

"Well, one you're told not to. And two it's the fear of walking in and having guys look at me, like why is she in there?"

While Rainey acknowledges that others might be worried about their safety, and is fearful that some kids might try to abuse the power, he says it's the furthest thing from any reasonable person's mind.