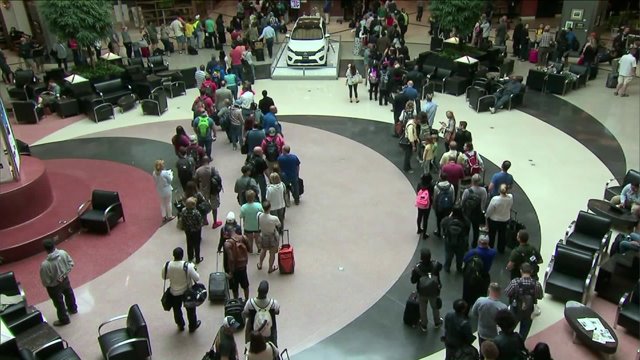 The government will seek to hire more TSA officers, give the agency more flexibility in assigning employees and ask airlines to help with "non-security" work, among other initiatives to reduce security line wait times, Johnson said.

Get to the airport early and prepare to wait.

"This line starts at the sliding departure doors by check in, zig zags through the baggage claim belts, though the lobby and finally to TSA," Jones Tweeted.

She said she only made her flight because a TSA officer told her to go to the international terminal, which had a much shorter security line.

"The security line at #Atlanta #HartsfieldJackson is insane," tweeted @JohnFricke on Thursday. "Starts in baggage claim!"

The Atlanta airport closed down one of its security lines last week to install new equipment for an expedited screening process that's scheduled to go into testing later this month.

By midmorning Friday, Atlanta's snarled, serpentine security lines had dissipated and passengers were moving through checkpoints, CNN staffers there reported.

Airlines for America, an airline industry group, is asking fliers to take photos of those long security lines and post them to social media with the hashtag: #iHateTheWait.

Several of the country's busiest airports have threatened to replace the TSA with private passenger screening companies.

The Port Authority of New York and New Jersey, which operates Newark, John F. Kennedy and LaGuardia airports, was the latest agency to demand that the TSA add more staff to reduce wait times in security lines.

From mid-March to mid-April, there were hundreds of times that passengers waited more than 20 minutes -- and sometimes more than 55 minutes, a Port Authority letter said.

In February, Atlanta's airport -- the busiest passenger airport in the world -- sent a letter to the TSA complaining about "inadequate" staffing and warning about increasing passenger traffic this summer.

TSA Administrator Peter Neffenger blamed the long lines to a loss of thousands of employees in 2014 that the agency has yet to replace.

"When I came into this organization last year, I found an organization with 5,800 fewer screeners and it had fewer front-line officers than it had four years previously," said Neffenger, testifying Thursday before the House Oversight Committee.

"And that was in the face of significantly higher traffic volume."

Congress holds the purse strings, and it gave the agency some relief earlier this week.

The head of the Department of Homeland Security, which includes the TSA, received congressional approval Wednesday to reallocate $34 million in its budget to increase the number of officers at airports.

About $26 million will pay for additional overtime and part-time hours, and about $8 million will go toward the hiring of 768 officers this month.

The airport temporarily closed one of three domestic TSA checkpoints May 4 for installation and calibration of two experimental screening lines that are expected to open May 24.

The shutdown forced thousands of daily domestic travelers who would have normally passed through that checkpoint to go through the airport's two remaining checkpoints. That -- along with seasonal traffic -- is making Atlanta's TSA lines worse than usual.

The experimental screening areas -- so-called Innovation Lines -- are now being developed only at Atlanta's airport, the agency said, with the aim of screening more passengers in less time. If successful, they could be replicated at other U.S. airports.

Adding to the TSA's woes: Thousands of checked bags missed their flights Thursday at Sky Harbor Airport in Phoenix after computer server issues kept the TSA from using machines to screen baggage.