For Pace student and veteran, bills pile up, even with the help of the GI Bill 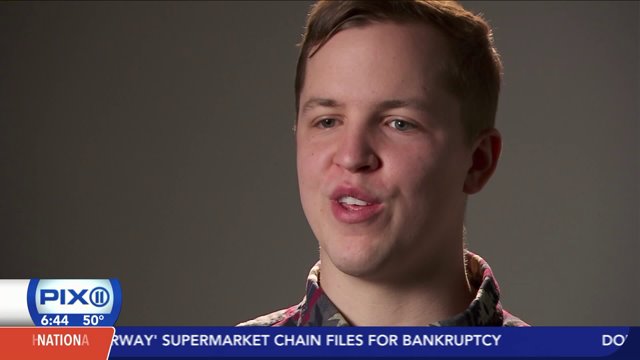 For many returning veterans, getting a college education is a priority.  But paying for it isn’t always easy.

That’s why PIX11 has partnered with the Veterans Education Challenge (VEC).   It’s an organization dedicated to sending U.S. military vets to college, and provides them with needed scholarships that the GI Bill does not cover.

VEC founders, Avis and Bruce Richards, started the “Veterans Education $1 Million Matching Challenge” to help fund higher education for returning veterans.  Every dollar donated between Veterans Day 2015 and Veterans Day 2016 will be matched dollar-for-dollar by the Richards up to one million dollars.

We share the story of Air Force veteran and reservist Joe Bodd, who is taking advantage of the educational opportunity given to him through the bill, federal and state grants, and a school scholarship.

Joe Bodd followed in his grandfather’s footsteps.  In December 2009, after a year of college, he joined the Air Force.

“My grandfather was in the Air Force, so I said ‘I might as well carry on the tradition.’  There are so many outlets for you to do great things in the Air Force.  That’s why I like it,”  Bodd said.  “It’s more about camaraderie, like people aren’t trying to jump over each other to make the next rank or do the next greatest job.  We all work together.”

In 2011, Bodd was deployed to Iraq, where he was assigned to the protect Balad Air Base.  During his 2 years of active duty, he married fellow Air Force veteran, Frances Escorcia.   After completing their tours, they headed home to Staten Island.

“I remember coming over the Goethals Bridge, and feeling like this is it, new opportunities,” Bodd reflected.  “and the real world hits you in the face.  My wife was pregnant.”

“I just want to be that model for my daughter.  I’m proud of what my dad did, what he does,” said the 26-year-old father.

And little Jayda has lots to be proud of.  Bodd is now a reservist out of McGuire Air Force Base.  Plus, he’s become a member of the FDNY.

On top of fighting fires, Bodd has been going to school  full time.  He’s finishing up his bachelor of arts in economics and criminal justice at Pace University in Manhattan.

“I want to become a pilot in the Reserves,”  Bodd said.  "You need a bachelor’s degree, so I was looking for something that wasn’t too hard but still challenges you.”

Bodd, who  is 80 percent covered by the post 9/11 GI Bill, has received federal and state grants as well as a 50 percent tuition scholarship from Pace.

But there are, as Bodd pointed out, many vets who struggle to meet the costs of housing and childcare.   Since both he and his wife are in school,  they’ve needed to provide care for their daughter, and have had to take out loans.