City considers reducing rents for 1M families; why tenants and landlords have doubts 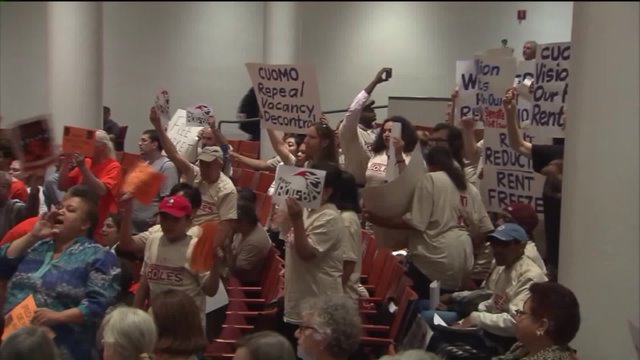 NEW YORK — After setting an historic record last year by not raising rents on the city's 1.03 million rent-regulated apartments, the Rent Guidelines Board now considers making local history again by actually reducing rents for the first time ever.

Both tenants and landlords have strong reactions to that possibility, but their comments about it may take some people by surprise.

Before setting new rent rates for the year ahead every June, the Rent Guidelines Board, or RGB, holds a meeting to set a possible range of increase.  That meeting takes place Tuesday evening at the CUNY Graduate Center in midtown; the expected range of increase is 0 to 2 percent.

It is possible, however, that the range will be below zero.

That's due to a few factors, including the fact that the rate has been on a decline for two years.  In 2014, the board recommended a one percent increase, followed by that historic zero percent increase last year.

Couple that with the fact that heating costs have, by some estimates, dropped 20 to 30 percent in the last year, and it's apparent that a rent decrease, or rollback, is possible.

"That would be fantastic," rent regulated Bronx resident and tenant activist Beverly Creighton told PIX11 News in an interview, "but the mayor has the final say," she said.

"[Mayor Bill de Blasio] is not going to agree to this," she added, and asserted that because de Blasio is approaching reelection, he may not want to upset property owners.

However, Jack Freund, Vice President of the pro-landlord Rent Stabilization Association, said that Mayor de Blasio had erred on the side of appealing too strongly to tenants by encouraging his appointees on the RGB to keep rent increases at the absolute minimum.

As for the possibility of a rent rollback, however, the landlords seem to be in agreement with tenants like Ms. Creighton.

The mayor, said Freund, is himself a landlord.  How can he ask for a move that would negatively effect his bottom line? friend asked.

After the RGB meeting on Tuesday, the board will hold a series of hearings in which tenants and landlords can give their input.

The board will then vote on a new rent rate at a public meeting late next month.