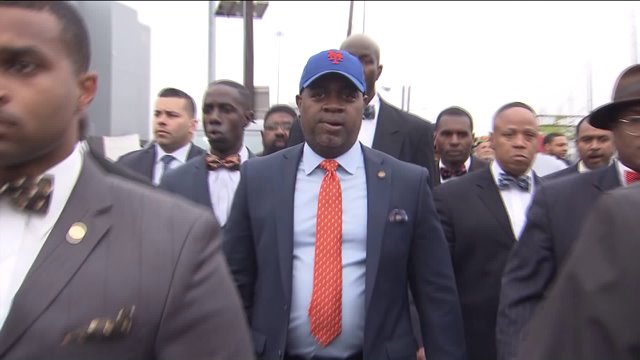 NEWARK, N.J. — Newark Mayor Ras Baraka led a coalition of protestors today at a rally calling for the hiring of more local residents at Port Newark.

Port Newark is one of six ports or terminals that make up the Port of New York New Jersey.  It is the largest and busiest Port on the East Coast. It's also the 3rd largest in the nation. The six combined terminals handle 3.3 million cargo containers per year.

Baraka charges there's a racial, gender and ethnic inequality in employment practices by the International Longshoremen's Association and the New York Shipping Association. Today, he led a demonstration demanding change.

He claims there is a bias against the hiring of local residents, minorities and women.

Mayor Baraka was joined by members of the Newark Municipal Council, and several community partners including local clergy, the Newark branch of the NAACP and the New Jersey Institute for Social Justice.

At least 300 demonstrators marched with Baraka down Corbin Street to the port this afternoon.

Protestors chanted "What do we want!? Jobs!"

Many also held up signs. The signs carrying slogans like: 'Newark residents are qualified too' and 'We deserve to feed our families off of Port Newark.'

"77 percent of this neighborhood in Elizabeth and Newark are minority Hispanic and African Americans  but they don't meet the numbers who are checkers and longshoreman," said Al Turrick Kenney, Manager of Port Activities for the City of Newark.

Kenney adds "The numbers say checkers are one of the highest positions paid in the port. 150 were hired recently, only four from Newark. Of the 150, only 18 were women and the numbers for African Americans were extremely low."

PIX11 reached out to both organizations for comment. The New York Shipping Association (NYSA)  declined to be interviewed or issue a written statement. They directed us to their website.

But Kenney says more needs to be done.

"Out of 365 mechanics, there are no women that work as mechanics at this port and we say we can find women and we have found the women with the skills, qualifications and background to work."

"We want to tell the port if you look for qualifies minorities to fill these vacancies, we have 600 who have applied."

They say they just want the opportunity to work and have sent the applications to NYSA.

Mayor Baraka has also asked the U.S. Labor Dept to open a federal investigation into the so-called unfair hiring practices at the Ports.

But the International Longshoremen's Association is firing back at Baraka. ILA president Harold J. Daggett sent a letter to Labor Secretary Thomas Perez, stating in part: "The statistics on which Mayor Baraka relies are not only misleading, they do not even support his contentions."

Daggett also says in the letter the ILA has a long and proud tradition of fighting for civil rights that dates back decades.

There's been no word from the U.S. Labor Department if they will indeed open an investigation.