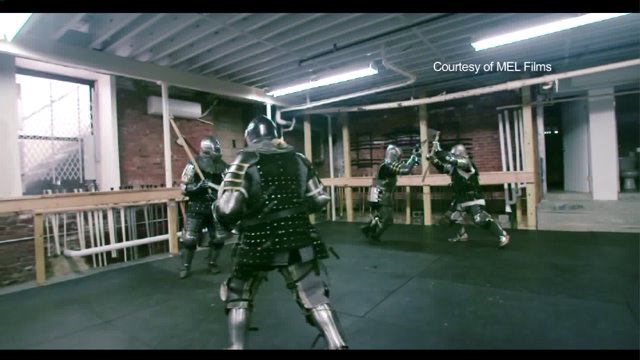 A veteran of the US Air Force, by day this Harvard graduate calls the shots as a management consultant at a top investment bank in Midtown.

By night, the 35-year-old smashes heads with a medieval club.

DiGrazia is the captain and a founding member of the New York chapter of the Armored Combat League, an international sport that’s likened to a ‘Game Of Thrones’-type Fight Club where anything medieval goes.

“I am more into it for the sport aspect of it because as a martial artist – I did a lot of martial arts before this, this is like a martial artists’ dream.“
The protective armor weighs about 75 pounds and the objective is don’t get knocked down.

In recent years, the sport has grown in the Big Apple prompting a custom-made facility to open along 125th Street in East Harlem, attracting what you may call a very eclectic crowd.

“It’s completely across the board,” he said. “We have people who work for a toy company, [another who is] a social worker.

The common thread shared by members is a fearless attitude that was masterfully captured by MEL Films  in a mini documentary posted online.

While the sport is brutal, DiGrazia insists fighters carry themselves with class.

“We don’t get angry, don’t punch the floor if you lose,” he said. “One guy does that a lot. You know we just do this in a good sportsman, good gentlemanly way.”

“We [need to] set a good positive example.”