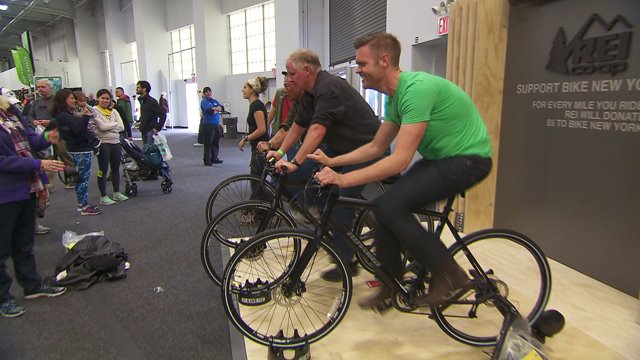 PIX11 News gives you a sneak peek at Bike Expo New York, where you can check out new products, fun competitions and meet others in the community

“Bike Expo New York is the largest consumer bike expo in the country," Ken Podziba, President and CEO of Bike New York, explained. "Over two days we have more than 60,000 people and what I think is so special about this is we open it up to the public for free.”

People come from across the country and around the world to check out the best of the best in the industry ahead of Sunday's 'TD Five Boro Bike Tour.'

“I’ve been riding the Bike Tour since 1995 and it’s grown tremendously, it’s a fantastic day out," Len Oppenheimer, a visitor, smiled.

From avid riders to first timers, the Expo has you covered. And making this event what it is? The diverse group of vendors.

“We’re the Foundation 4 Heroes, and we're a nonprofit organization," a man dressed as Batman explained. "And we inspire children who are battling tough diseases and support the families that are there to support them."

“I wanted a bag I could put on my bike,“ Maria Boustead, founder of Po Campo, described. ”So this fastens to the top of the bike rack!”

“This is the gay pride flag, it says Ride with Pride," Erica Espinoza, employee at Danny's Cycles, said. "We definitely wanted to support our neighborhood and show some love to the LGBTQ community."

All the proceeds from the Expo and Tour go right back into the community, through Bike New York's numerous year-round programs.

"We offer youth programs for school-age kids and then we also have the programs that help adults learn to ride bikes," Mark Plaut, Manager of Public Programs at Bike New York, said.

You can get a preview of what they offer with free bike lessons here.

"My friend and I didn't know how to ride bikes, so we found this and just had to do it!" Carly said.

And even win some cool gifts in any one of the competitions, like this one seeing who can fold up a bike the quickest.

While I'm no expert bike rider, I do have some experience with what's on everyone's mind for the race, a little thing called the weather! Rain is on its way, but don't worry, the Expo has something for that too!

I'll see you Sunday at the starting line!