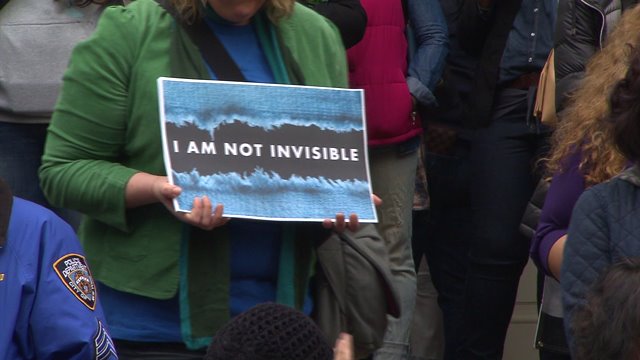 NEW YORK — “No means no, and yes means yes,” was a chant emanating from the City Hall Wednesday.

It’s also a message that unfortunately keeps getting lost, and it brought out a coalition of elected officials, council members and First Lady Chirlane McCray as well as hundreds of survivors of sexual assault to the steps of City Hall to commemorate Denim Day NYC.

Started nearly 20 years ago, Denim Day refers to a 1998 Supreme Court case in Italy where a rape conviction was overturned because the judge ruled the victim’s jeans were too tight – and that she must’ve had assisted in removing them.

For attendee Tiffany Daure, finding peace was far from her grasp after she was sexually abused as a child by her father but it’s the support and acceptance she’s gotten through outlets like Denim Day that’s given her the strength to move forward.

“You have to have that willpower as a woman to know that you can overcome the situation and that you can achieve your goals achieve your dreams have a family have a relationship have a great career,” Daure told PIX11 News. “There’s something good that will come out of all of this.”