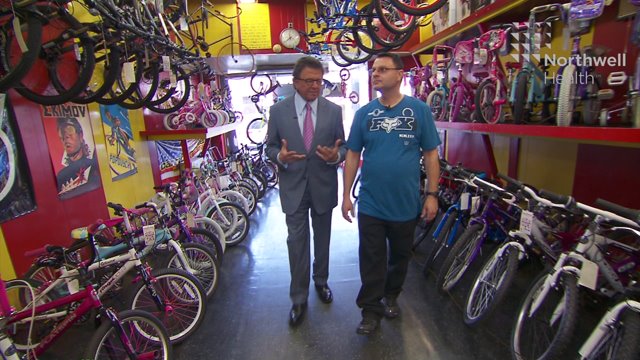 In this week`s It`s a "G" Thing, Mr. G visits the oldest bike shop in the country to show how it`s still running strong after nearly 100 years.

An antique that hangs in the corner of the store serves as a reminder of why this family-owned shop is so special.

“Several years later, this guy’s granddaughter brought the bicycle back to us saying that he passed away and that his dying wish was for this bicycle to be here,” he said.

A nearly century-long connection 'Bellitte Bikes' has shared with this Queens community.

“We are the oldest, continuously run in the country," he said.

Sal's grandfather, Sam, opened the store in 1918 and has lasted through war and the Great Depression.

“It was an inexpensive way of transportation, people still needed to get around, so he survived,” Bellitte explained.

“What does the bike offer that’s a common thread through the generations" I asked. "Freedom,” he replied.

But it's passion and pride that has kept this place a family affair.

“I’m Sal’s sister, Carl’s wife, and Peter’s cousin," Patrice Herzer smiled. "I'm third generation and when I was 16 my dad said it was time to come work in the shop. I didn't mind at all, he was a great dad."

“The joy is when I started here I would deal with kids that would come in to buy a bike and today they’re bring their kids in to buy a bike,” Peter Frouws, Sal's cousin's husband, smiled.

Bellitte sells and repairs all types of bikes and parts, but it's the people that keep customers coming back.

“The service here is incredible, they’re honest, ethical, and prices are fair,” Nachum Frederick, a customer, said. “They're willing to go the extra mile.”

Qualities Sal hopes the next generation will build on one day.

“My daughter is very interested in the business, she’s 21 and still in school," he said. "But time will tell I’m sure.”

I could feel the tradition in the building and couldn't leave without taking one of these classics out for a spin!

*Correction: PIX11 News has since learned that Bennett's Bicycles in Staten Island has been owned and operated by the same family since 1896. Making it older than Bellitte Bicycles.