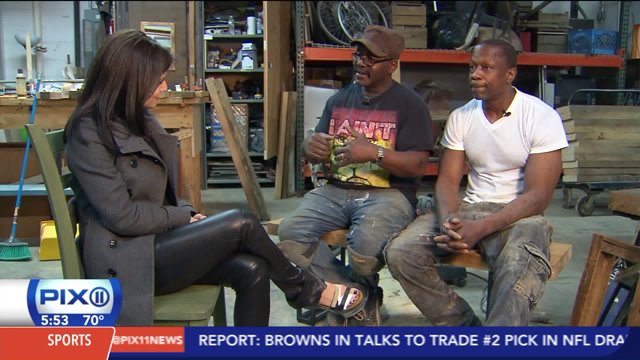 Tamsen Fadal sits down with two former inmates who are now getting a fresh start through nonprofit, Refoundry.

“When I put table together or bench or mirror, as I build it, I’m building myself,” Gene Manigo said.

It's a story of redemption, set in the Brooklyn Navy Yard where Gene Manigo and James Eleby Jr. now spend their days.

“I have to tell myself what they say doesn’t matter, and continue to do what I need to do for myself,” Eleby Jr. said.

For a majority of their lives, they were behind bars.

“I went away multiple times and each time it was bad decision making on my part,” Eleby Jr. explained.

“It was an experience that I needed and it was a chance for me to pay back for my wrong,” Manigo said.

Wrongs never far from their minds as they work to make a fresh start for themselves through the non-profit Refoundry. In part, the brainchild of Tommy Safian.

“We knew that our criminal justice system was in trouble but we had really no idea about how bad the situation was in particular on the back end,” Safian said.

Value many offenders don't realize they have, which in New York has lead to about 40 percent of former inmates  returning to prison within three years of being released. A statistic Tommy believes the community can change.

"We all share many of the same underlying values and interests and it’s really working together to achieve those," Safian explained. "And there’s no place in the world that has the diversity of people working together than New York City.”

Each week Gene and James sell their pieces at flea markets and keep a portion of the profits.

“There was a lady who sent us back a picture, she bought a table that I made,” Eleby Jr. said. “The feeling is indescribable when you see someone eating at home on your table.”

They also offer an incumbator program where participants can eventually own their own business.

"We train and retain," Safian said. "We don't just give them a few skills and send them on their way."

A constructive and collaborative mindset they also hope to bring into the prisons through an artistic 'Handprint' initiative.

“When people are arrested, they’re fingerprinted by the State and that kind of defines them," Safian said. "What we do is kind of re-mythologize that process to regain the power of their identity.”