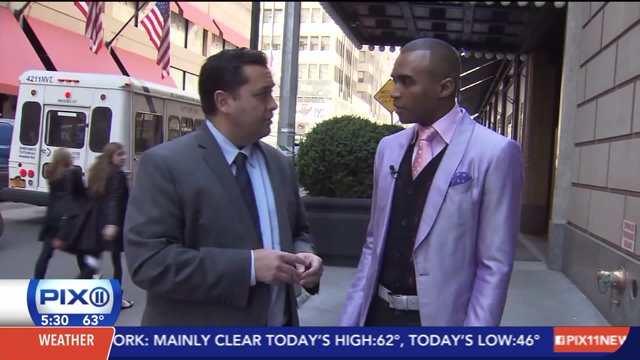 NEW YORK – Jovite Guembou's request is one heard in the past in connection to black shoppers and major Manhattan retail stores.

"If you are to arrest somebody, because they did something wrong," Guembou said. "Make sure that you are arresting the right person. Just don't arrest someone because they are black."

PIX 11 News first exposed the case of actor Rob Brown's false arrest at Macy's in October 2013. Additionally, PIX 11 News connected the NYPD working with Barneys in various cases as a result of the Trayon Christian false arrest. Ultimately, these two cases were the foundation of the Shop-and-Frisk scandal.

Guembou shared exclusively his story with PIX 11 News on Friday.

Guembou was stunned to find himself detained along 49th street, a few feet from the store's south exit.

"After some time I heard somebody talk in the walkie-talkie, somebody said, 'you got the wrong black guy' and he let go of me and he walked back into the store without even looking at me without saying a word."

Guembou, who is studying for a masters in nursing at NYU, went into the store and approached management. It is then he says they informed him of the following,

In fact, he said Saks management even offered a financial apology: a $200 gift certificate to use in the store.

Guembou's attorney MIchael Palillo showed PIX 11 News the gift card along with the business cards for the loss prevention management team his client dealt with after the incident. He characterized the incident in four words, "It is very offensive."

For Palillo, it is deja vu. The attorney had the initial Christian case involving Barneys.

"I don't believe they understand the impact and the seriousness of what happened," Palillo said.
For Guembou's dealing with Sak's is nothing new. He is a part-time model and said that he used to model at one of the retailers stores in Washington D.C.
Late Friday, in an email to PIX 11 News, a spokesperson representing Saks Fifth Avenue acknowledged the incident:

"We take this matter seriously. For the protection of our customers and associates, Saks Fifth Avenue is committed to providing and upholding best-in-class store security standards, in compliance with all applicable laws. This brief encounter, which lasted less than 10 seconds last summer, occurred in the midst of a shoplifting apprehension at our store and was immediately addressed."

One final note, unlike previous Shop and Frisk cases that PIX 11 News has reported on, the NYPD had no involvement in this case.