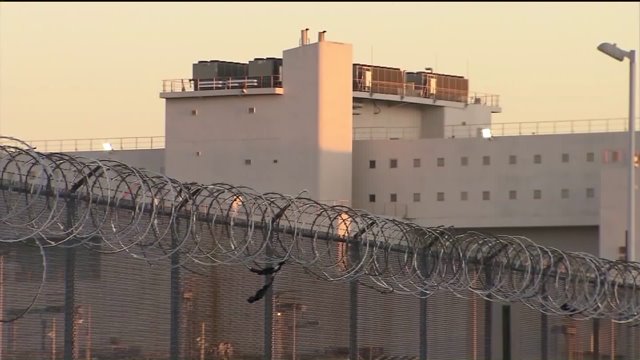 HUNTS POINT, Bronx – Many groups have been calling for the shutdown of troubled Riker's Island. Now there may be a plan to build new jails ahead of that.

A secret plan for a "mini Rikers" appears to be in the works. City officials are looking at various locations. One of those is Hunts Point in the Bronx.

That's not sitting well with lawmakers representing Hunt's Point. Politicians in this area want answers from Mayor de Blasio and enough with the secrecy.

Hunts Point community leaders said they're hearing of a secret proposal to build a new mini Rikers at the parking lot of the Vernon C. Bain Center on Halleck Street. The center is an 800-bed jail barge used to hold inmates. Nicknamed "The Boat" by prison staff and inmates, the prison ship has been here for a quarter century. It would be shuttered if a new prison were built.

Henry Santana has lived in Hunts Point for 25 years. The proposed site of the new jail is just a mile from his house.

Publicly Mayor Bill de Blasio has said plans to shut down troubled Rikers Island are not feasible and would cost the city billions to open new facilities to house inmates.

But State senator Jeff Klein says city officials have been quietly looking at alternatives if they close Rikers. One of those sites - Hunts Point.

He takes issue with a process shrouded in secrecy.

"The mayor has to come clean is there going to be a prison or not," Klein said. "And I think the community of Hunts Point is saying loud and clear we don't want a prison in our community."

Council member Rafael Salamanca said they've seen an 18-page document with plans for a possible 2000 bed jail in this neighborhood.

"I'm getting flooded with calls from my office. Immediately when I got the report I called the Mayor's Office I'm waiting to hear back," Salamarca said.

Neighborhood leaders said Hunts Point, which has been a struggling community is on the rebound. And it's not fair to build a jail here. Property values would decrease and it would be known as the place with.

"The neighborhood is getting better why do that to us doesn't make sense," Santana said.

Senator Klein adds "It's a hard working community we do our best to improve quality of life we close down strip clubs and other undesirable properties we don't need a prison where our kids go to school. We want a get out of jail free card."

Senator Klein and council member Salamanca will be holding a rally right on Saturday at 12:45 p.m.

PIX11 News reached out to City Hall for a response.

"There is no comprehensive plan to close Rikers or any active effort to look for sites. The administration has examined the feasibility of closure in the past and determined there were numerous, significant challenges associated with this notion, which the Mayor has publicly discussed. Creating a culture of safety in our jails is our top priority – today, not a year from now. While the City continues to examine whether Rikers Island’s closure is feasible and to work with Lippman's Commission, our focus today remains on reform of the correctional system that will make our jails safer now."