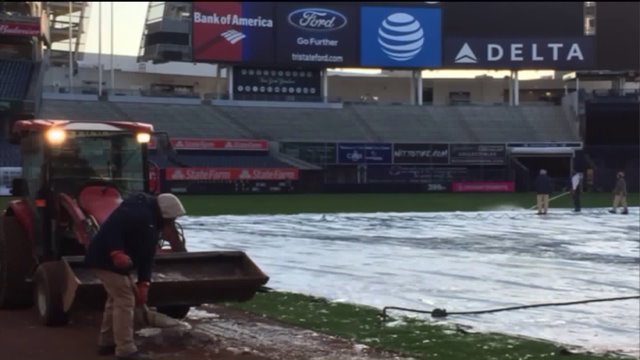 NEW YORK — Tuesday was the coldest April day in New York since 1995, and while chilly weather in April is nothing new for our area, the colder than normal week and month, so far, may be an indication of something beyond coincidence.  Season shift, where the traditional meteorological seasons' general starting and ending dates re-calibrate, may be evident in the conditions the Tri-State is experiencing.

One place where the possible re-setting of seasons is felt most strongly is at a place most heavily associated with a season very different from the conditions New York had on Tuesday.

The boys of summer began their season at home a day late at Yankee Stadium.  Their Monday home opener had been canceled due to a cold, steady rain.  Tuesday, at least, was clear, even though it was cold.  The wind chill measured at the stadium was 25 degrees, with an air temperature of 36.

As a result, the devoted fans who'd managed to brave the weather did so in gloves, scarves and even blankets.

Among the most devoted fans was Michael Schlacter, founder of the long-range meteorology firm Weather 2000.

"Our winters are shifting," Schlacter said in an interview outside of the stadium.  Winter, he said, has been recalibrating to a January through April cycle, rather than the December through March cycle in which it has typically run.

The flip side of that, said Schlacter, is that we should increasingly see a post-season of baseball that has a "balmy September and October."

Schlacter is a leader in a large and growing group of meteorologists who see a season shift.  He won't venture into controversies about climate change or global warming.

However, does tell many of his clients, which rely heavily on long-term forecasting,  that  "climate shifting is where our research is [pointing]," and that it indicates later winters, as well as later summers.

"It kind of makes sense," said Jay Saboe-Rodriguez, who PIX11 News encountered in Downtown Brooklyn, "because December was so warm... The whole thing kind of shifted."

Debra Newton, another Brooklyn pedestrian, said that the cold that has extended more than two weeks into spring has thrown her off.