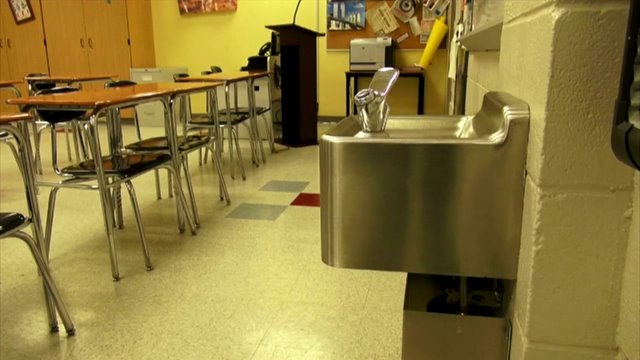 A water fountain in the high school cafeteria tested for lead at 33 times above the federal limit.

“At that time the results from that report indicated that they were very low levels and that in fact, the remediation that was required involved just replacing the filters or taking them offline,” said Elizabeth Superintendent Olga Hugelmeyer.

Hugelmeyer said that 20 water fountains were remediated. But testing data provided to PIX11 by the district in response to an open records request shows at least 22 water fountain locations where lead was a problem.

Hugelmeyer said the district replaced 6 water fountain filters, they disconnected 13 water fountains and installed a cooling unit in one location.

The district first told parents about the 2013 lead testing in March of 2016. A letter from the Superintendent pointed to how lead contamination had been in the news cycle. The letter did not inform parents as to which schools tested positive for lead or how high those levels levels were found to be.

Parents who spoke to PIX11 said they never saw the letter and said they should have been informed sooner.

“This is the health of the kids. This affects their growth, their development. They have to let us know,” said Ada Flores, whose grandson attends Abraham Lincoln Elementary.

Lincoln Elementary tested second-highest in the district for lead in 2013.

"I think they should let the parents know, especially, cause our kids are drinking this water,” said Maria Tavares, whose 8-year-old son also attends Lincoln Elementary.

PIX11 asked the Superintendent why the district did not share the results with parents.

“I think that was the proper response,” said Superintendent Hugelmeyer, “the way in which the district remediated despite the fact that there was no requirement to. I think that is really the message that needs to be communicated, with regard to our being proactive.”

Some parents say they now plan to have their kids tested.

"They’re doing what they have to do to save money. That’s all it comes down to, money,” said Flores.

As part of PIX11’s record request, we asked to see documentation of any remediation done, such as purchase orders or invoices. The district has failed to provide those documents despite stating that this part of our request was complete.

The Superintendent now says that all water sources in the district will be re-tested to ensure that the water is safe.