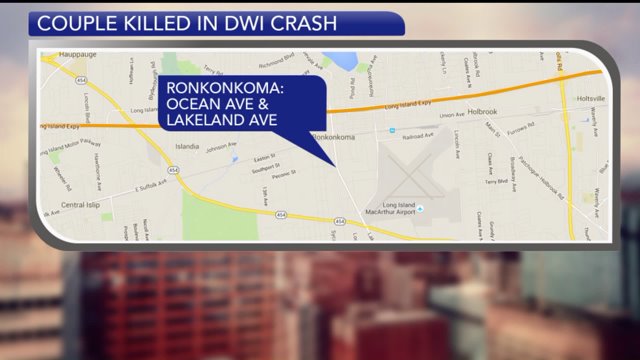 RONKONKOMA, N.Y. – A husband and wife on their way home were killed in a drunk driving collision on Long Island Sunday night, police said.

Suffolk County police have arrested Kyle Glinka, 23, for driving while intoxicated after he was involved in a crash that killed William Kear, 67, and Joanne Kear, 66.

The accident happened on Ocean and Lakeland avenues at around 9 p.m.

William and Joanne were making a left turn to travel north on Ocean Avenue in their 2014 Chevrolet pickup truck when their vehicle was struck by a 2012 Audi A4, operated by Glinka, was who was traveling southbound on Ocean Avenue in Ronkonkoma, police said.

The couple from Medford was taken to Brookhaven Memorial Hospital Medical Center where they were pronounced dead from their injuries.

Glinka, of Bohemia, was taken to Stony Brook University Hospital for non-life threatening injuries. He was arrested and charged with a DUI.