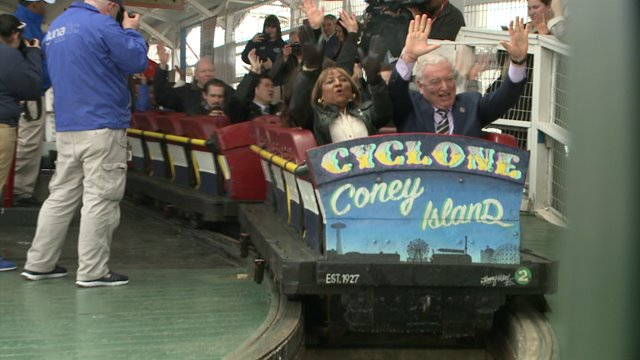 CONEY ISLAND, Brooklyn — An old fashioned Brooklyn egg cream in a bottle was used to christen the newly refurbished Coney Island cyclone on Saturday, kicking off the start of Luna Park’s 2016 season.

Elected officials, including Senator Chuck Schumer and Brooklyn Borough President Eric Adams, were on hand to celebrate the opening.

Luna Park features 30 attractions.  A new ride called Endeavor will be added in late April.  It will give riders the sensation of flying sixty feet through the air at 25 miles per hour.

Visitors can now take advantage of a new platinum wristband, which for $70, gives guests four hours of unlimited rides and deals on five of Luna Park’s  so-called extreme thrill rides.

Megan and Brian McLaughlin came in from Buffalo for a wedding on Coney Island’s  famous boardwalk, not realizing rides were already up and running.

So they decided to give the iconic roller coaster a try for the first time.

“I thought it was wonderful,” said Megan McLaughlin.  “It’s my favorite kind of old school roller coaster—wooden tracks, knocks you around, tiny seats.  It was great.”

Luna Park will be open only on weekends until Memorial Day Weekend.  Then it will stay open daily through the summer.