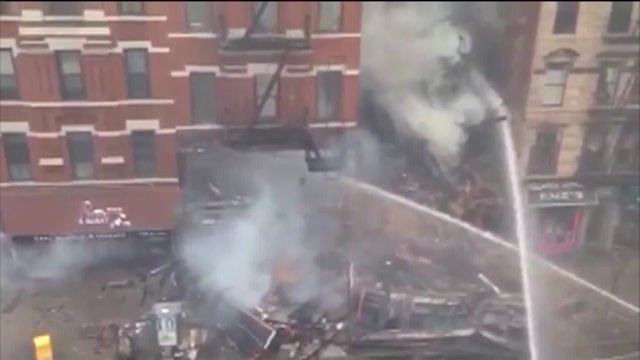 East Village residents and elected officials gathered on the corner of Seventh Street and Second Avenue to remember the explosion caused by alleged illegal gas tampering one year ago.

The devastating blast took the lives of 23-year-old Nicholas Figueroa and 27-year-old Moises Locon and left dozens others homeless.

There was a moment of silence.

The father of one of the victims was touched by this neighborhood's outpouring of love, especially the firefighters.

"The Fire Department stood here until the end." Nixon Figueroa, who lost his son Nicholas, told PIX11. "They treated my son and Moises as if they had lost one of their own."

Many in this crowd say they take comfort in the fact that the landlord of 121  Second Avenue, her son, a contractor and an unlicensed plumber are all awaiting trial on manslaughter charges.

City Councilmember Rosie Mendez is the lead sponsor of a bill requiring gas providers to notify the city within 24 hours of a gas shutoff.

"In February, in the city council, nine pieces of legislation have been introduced, including one mandating yearly inspections of all pipes and another one with more transparency."," Mendez told PIX11.

Many residents talked of how difficult it's been to rebuild their lives.

"Sometimes I am very sad, I remember all the memories and celebrations with my family," Mildred Guy, who lived on this corner for 45 years until the explosion destroyed her home, told PIX11.

"Many of us who still live on this block, we see the smoke and the flames, " Stuart Lipsky, a neighbor, told PIX11. "It's not good," he added wistfully.