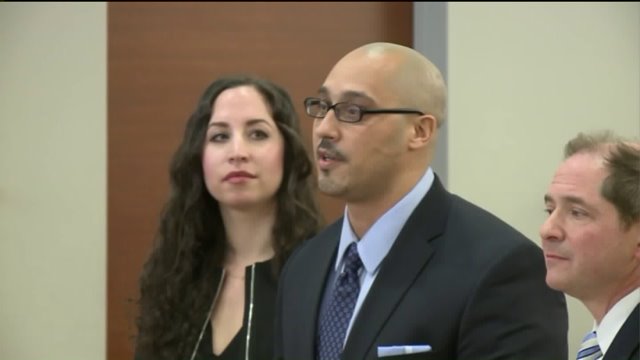 SOUTH BRONX — He was a thousand miles away when somebody he didn't even know was murdered.  While that homicide was a tragedy, what makes the situation even more tragic is that Richard Rosario was convicted of the murder of Jorge Collazo, even though he was eight states away from the scene when the slaying took place.

That was 20 years ago, and Rosario has been behind bars ever since for the crime, even though he had more than a dozen witnesses, including two law enforcement officers, who could prove that he was far from the scene of the crime when it was committed.

On Wednesday, Rosario walked into a courtroom at the Bronx Hall of Justice in handcuffs, officially a convicted murderer.  Minutes later, corrections officers removed the cuffs, never to return them.

Rosario, 40, is the subject of what his lawyers said was his "right to a fair trial undermined in violation of the United States Constitution."

That's how attorney Glenn Garber described the case in court.  He continued, "In particular, he was denied fair counsel."

In June of 1996, Rosario had been picked out of a lineup of mug shots compiled by police after the murder of Collazo, 16, in the Soundview section of the borough.  However, during all of the month of June that year, Rosario lived with family friends in Deltona, Florida — 1,063 miles away.

After he'd gotten word that detectives were looking for him, Rosario voluntarily traveled by bus back to the Bronx and interviewed with police.  He also provided them with a list of 13 witnesses,  including two Florida law officers, who could prove he was in their state when the shots rang out.

However, Rosario's court appointed attorney didn't end up interviewing any but two of the alibi witnesses, despite the fact that the attorney had secured government funding to do so.

Prosecutors on Wednesday admitted that Rosario's situation was flawed, through no fault of his own.

"We concede that the defendant did not receive effective counsel," said assistant district attorney Julian Bond O'Connor in open court.

Rosario was granted the last statement of the proceeding.  "My hope is that this conviction is not just vacated, but that exoneration is given to me," he said.

The difference is key. Even though Judge Robert Torres officially released Rosario just before noon on Wednesday, Rosario is not fully free.  District Attorney Darcel Clark said in a statement that she "will continue the murder investigation to make sure Rosario's case shouldn't be re-tried.
We will continue to investigate the murder of George Collazo... so that his family might have closure,” said Clark, who's been in office for two months.

“The charges against Mr. Rosario," her statement goes on, "will remain open while we complete the alibi witnesses interviews and reinvestigate the case in order to decide whether to retry Mr. Rosario.”

Despite the lingering legal proceedings, the district attorney has received some high marks for bringing this case to the point at which it is now.  D.A. Clark took it upon herself, as part of her new criminal integrity unit, to ensure that the alibi witnesses who were overlooked 20 years ago were not overlooked now.

"This is a clear-cut example of a district attorney, at least in this instance, being an administer of justice," said New York-based advocate Jeffrey Deskovic, who was himself jailed for 16 years for a rape and murder he didn't commit, in an interview via Skype from Washington.

Deskovic praised the new D.A. for finally taking up a case that her predecessor Robert Johnson refused to revisit for two decades.

Rosario did not make any statement after his release other than to name the names of other inmates who he feels have been wrongfully convicted, and to praise his attorneys, who work for the Exoneration Initiative, an organization that specializes in cases like his.

"I love my lawyers," Rosario said just before kissing both of them.

One of them, Rebecca Freedman, summed up his situation now.  "Richard is ecstatic to be free," she told PIX11 News, "but he's still angry at the wrongs that were done to him by the justice system.  And I think he wants full vindication," Freedman continued.  "He wants a declaration of his actual innocence and he deserves one."

He has another hearing on June 24th.  It is possible that, at that court session or soon thereafter, Rosario will get the exoneration for which he's been waiting for two decades.