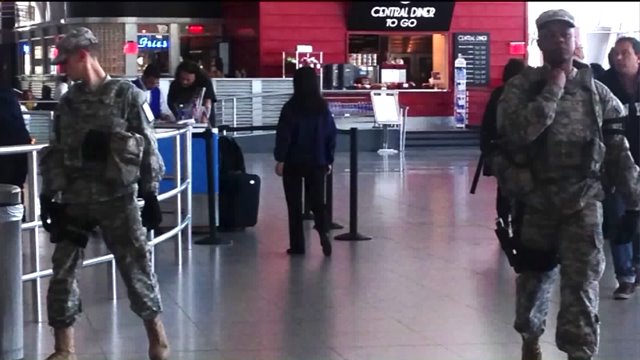 NEW YORK — In the aftermath of the Belgium terror attacks, security has been heightened area airports.

At Governor Cuomo's direction, the National Guard, State Police and Port Authority police are stepping up security at all Major Transit Hubs including JFK and LaGuardia.

"I have directed state law enforcement officials to step up security at high-profile locations around the state, including our airports, bridges, tunnels and mass transit systems. Public safety is paramount, and I want the people of this state to know that we are working with all local and federal partners, remaining vigilant and taking all necessary measures to keep New Yorkers safe," said Cuomo.

The Port Authority is increasing its police presence at all of its airports, bridges, tunnels and the World Trade Center, as well as the PATH and Port Authority Bus Terminal.

At JFK, we found a growing sense of heightened awareness. More than 400 flights in and out of Brussels have been canceled or diverted, including several scheduled to depart from JFK.

The horrific events in Brussels is very much on the minds of travelers at JFK.

One woman arriving from Brazil only heard about the attacks after she landed at JFK.

Gov. Cuomo and city leaders are asking New Yorkers to remain vigilant and report anything suspicious.

The Port Authority has it's own 1,800 member police force.

National guard members already have an ongoing presence at the airport.

Aviation expert Phil Derner tells PIX11 what travelers can expect In the coming days and weeks.

"They'll see more security they're going to be a larger police presence. Officers in tactical gear, so it may look very frightening to some people," said Derner.

Some travelers we spoke with today say they're starting to question why security at airports is just to get on a plane and they feel more needs to be done in terms of security as soon as you step foot near the terminal. But Derner says it's not feasible.

"This isn't so much an attack on aviation as it so much as it's an attack on where people congregate in large groups," said Derner. "So how far do we go?  Do we set up checkpoints around the city that obviously gets a little ridiculous."

What we can expect is for it to take many days before travel returns to normal.

By and large flights from NYC to other parts of Europe have not been affected. Normal operations at Brussels airport are not expected to resume until Thursday.

If you're traveling out of area airports in or the coming days, leave yourself some extra time to go through security. If you want to change your ticket, check with your airline to see if they can accommodate you.

Governor Cuomo has also directed New York State law enforcement to remain vigilant and step up security at high-profile locations like the airports.

The attack happening inside the Brussels airport departure hall reportedly near an American Airlines ticket counter.

"American is taking care of employees and customers at Brussels airport. At this time all of our airport employees and crew members are safe and accounted for with no reported injuries."