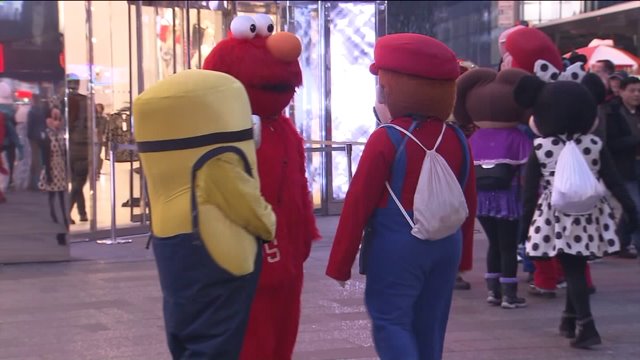 MANHATTAN — New York city council will be pushing legislation this week that will allow the Department of Transportation specify designated areas where Times Square costumed panhandlers can be in the pedestrian plaza.

The number of characters seem to be multiplying in Times Square, and while a lot of tourist seem to get a kick out of the impromptu photo ops, they quickly realize they need to cough up a buck or two.

City council members plan to push legislation that will allow the DOT to specify and limit where these characters can approach people for photos and tips in Time Square's pedestrian plaza.

One Spiderman character told PIX 11 News that containing him and other entertainers is not right.

Besides colorful Disney and Marvel characters, visitors will probably start seeing a lot more painted naked ladies when the weather gets warmer, an issue the city struggled to handle last summer.

"You don't want to limit the amount of kids seeing the bare-breasted ladies."

While many people would like to see the characters off the sidewalks to free up the congested areas, others say they should have a right to earn a living.

"I think they should be where they are because a lot of people walk through here," Emily Cabrera said.

"If they put her somewhere specific I feel like nobody will go to them and they won't make any business," Cabrera said.

The city council transportation committee plans to hold a hearing on the proposed law.