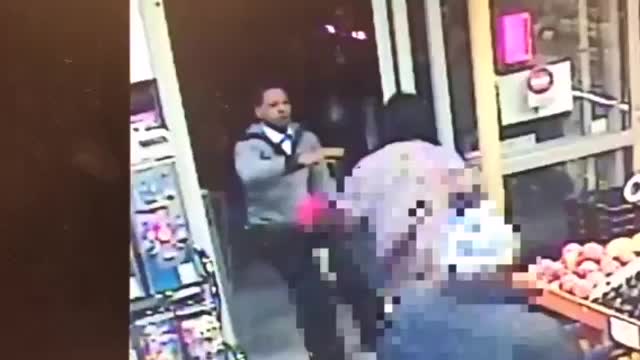 BEDFORD-STUYVESANT, Brooklyn — Police are looking for the man responsible for attempting to rob, then assaulting a livery cab driver with a surge protector.

On Wednesday at 7 p.m., a livery cab driver, 36, picked up the suspect at the corner of Gates Avenue and Fulton Street, police said.

When the cab arrived around 10 minutes later at the destination of Gates Avenue and Throop Avenue, the suspect left the cab. The suspect walked around the car and demanded money from the driver, police said.

The suspect is captured on surveillance video inside the supermarket at 631 Gates Avenue. (NYPD)

The suspect opened the driver's car door, pulled the victim out and punched the driver in the face, police said. The suspect struck him several times with a surge protector power cord, caught on a camera inside a supermarket at 631 Gates Avenue.

Nothing was stolen from the victim.The driver was taken to Kings County Hospital in stable condition.The suspect fled south on foot on Gates Avenue.

The suspect fled south on foot on Gates Avenue. The suspect was last seen wearing a gray sweater, black pants and black shoes.