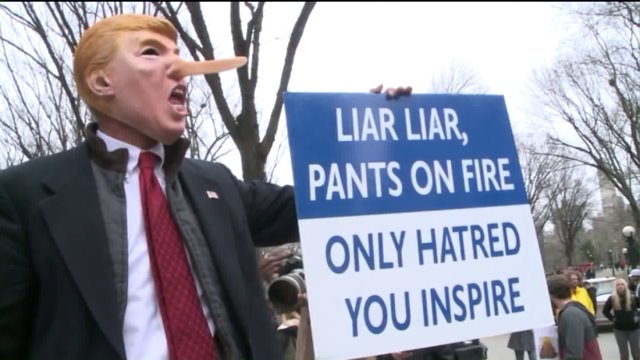 Anti-Trump protester Dr. Gil Mobley wore an anti-Trump mask with a long Pinocchio nose and held up a sign that said: "Liar, liar pants on fire only hatred you inspire." He said he traveled all the way from Missouri to protest the controversial Republican presidential candidate.

"Donald Trump is the epitome of a liar," Mobley told PIX11 News.

More than 500 protesters marched from Columbus Circle to Trump Tower at 56th Street and Fifth Avenue. There was heavy police presence that was welcomed by rally organizers.

"It was great," Steven Hamlin, spokesman for Cosmopolitan Anti-Fascism said. "The amount of mobility was fantastic," he added.

A handful of pro-Trump supporters were standing by as well.

"The people that are coming across our border illegally are stealing our work and their stealing our livelihood," Thomas Wedell, a Trump supporter, told PIX11 News.

And then anti-Trump protesters marched back to Columbus Circle.