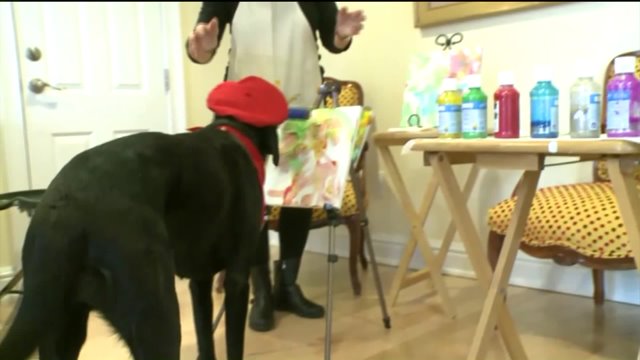 LONG ISLAND, N.Y. – At first glance, paintings in Yvonne Dagger's art room may not seem like much, but there's more bark behind the bristle brush than you think.

This is the artist behind that creation.

His fear of going up and down stairs disqualified him from his originally intended career path of becoming an assistance dog for people with disabilities.

Adopted and trained by his human mom, Yvonne Dagger- who is also an artist, she realized he had a way with the canvas after she says he saw her painting one day.

"He always lays down next to me. But one day he was nudging me and I asked if he wanted to paint and his tail started wagging!" she said.

Dagger paints by  following Yvonne's commands, who simply assists him by helping him choose colors of non-toxic acrylic paint.

Then, with brush in mouth made with duct tape and a paper towel tube, he gets to work.

In case you were wondering- yes his paintings Daggers paintings do sell.  About 50 to 100 dollars per canvas.

He recently commissioned a 16 x 20 painting for a couple in Seattle.

The proceeds all go towards animal related charities.

So the next time you get your dog to simply sit and give you paw and feel like that's a big victory? ​

Just remember, Dagger is quietly proving your dog is a total underachiever, one brush stroke at a time.

"I'm jealous of Dagger. He just knows what he knows and that brush stroke is just gonna land where it lands," she said.