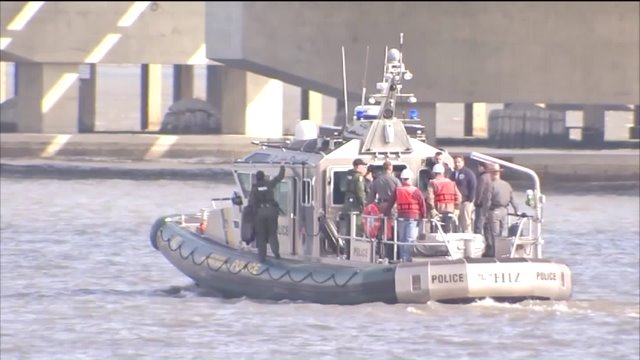 TARRYTOWN, N.Y.  — One person is dead and two still missing after a tugboat crashed and sank near the Tappan Zee bridge.

At 5:20 a.m. Saturday, a 90-foot tugboat operated by NY Marine Towing struck a barge and sank with three people aboard, near the Tappan Zee Bridge.

The barge was occupied by 13 contractors working on the Tappan Zee bridge. There were no injuries on the barge. Governor Cuomo said the contractors likely saw the imminent collision and braced themselves.

The New York Coast Guard Station launched a 45-foot response boat to search for the three missing people in the water, according to the Coast Guard. The NYPD's harbor and aviation units assisted the search.

10 minutes later, one person was recovered by a first responder and taken to EMS on shore, the Coast Guard said. NY State Police told the Associated Press the victim died on the way to the hospital.

The victim who died has been identified as Paul Amon, 62, of Bayville, N.J.

State Police divers are using sonars to find the tug boat and see if it's safe to approach. The boat is under approximately 40 feet of water.

The boat had 5,000 gallons of diesel aboard that is currently leaking into the Hudson. Officials from the DEC are on site managing the cleanup.

The Coast Guard asks that mariners in the area report any sightings to theNew York Coast Guard command center at 718-354-4353 or on the radio at VHF Marine Channel 16.