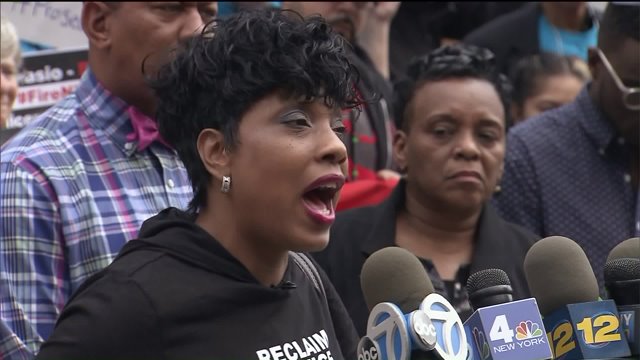 NEW YORK – Lawmakers and the family and friends of Ramarley Graham gathered on the steps of City Hall to demand accountability by firing the police officer involved in the 2012 fatal shooting of the teen, two days after a federal investigation found no charges against him.

Thursday afternoon, Graham's parents called on NYPD Commissioner Bratton and Mayor deBlasio to get rid of the police officers.

"These officers should not be running around with a gun or badge," Macolm said. "They're reckless. They murdered my son in front of my 6-year-old son and also his grandmother."

Federal prosecutors declined this week to file civil rights charges against Officer Richard Haste in the 2012 death of Ramarley Graham. It was the last opportunity for Haste face criminal charges.

Haste was initially indicted in the Bronx, but the case was thrown out. A second grand jury declined to indict him.

Haste followed Graham into his home and into the bathroom and killed him in the Wakefield section of the Bronx on February 2, 2012.. He said he believed the 18-year-old had a gun.

Haste remains stripped of his gun and badge. He has been charged internally and is facing disciplinary proceedings.

NYPD Commissioner Bill Bratton at a press conference Thursday said he wasn't familiar with the specific charges nor the number of officers charged in the matter.