19 years after his death, Notorious B.I.G.’s Brooklyn neighborhood has ‘no flavor’ 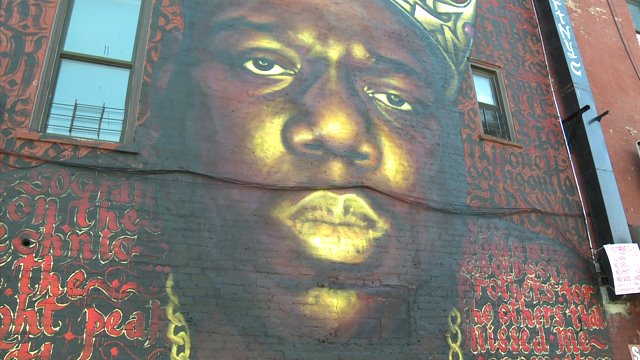 BROOKLYN, N.Y. — It was 19 years ago when the music world lost hip-hop icon Notorious B.I.G. The rapper, also known as Christopher Wallace, was gunned down in Los Angeles on March 7, 1997.

After nearly two decades, shockingly enough, no arrests have been made.

Despite the loss, his music lives on.

Inspiring a new generation of MC’s who – if they haven’t used a bar – have probably sampled a beat.

Gale widely credits the late rapper with opening the door to many modern day hip-hop acts who probably wouldn’t be enjoying the perks of mainstream radio.

“If you see the way how rap has become more accepted in part of the mainstream – Biggie was one of the biggest parts of that,” he said. “Before that there was underground and then Vanilla Ice and then MC Hammer, and Biggie was one of the first people along with Dr. Dre and Deathrow to really show that you can make rap commercial and rap credible.”

In his old neighborhood of Bedford-Stuyvesant, a mural honoring the rapper holds court at the intersection of Bedford Avenue and Quincy Street.

It’s one of the few things preserving the memory of Biggie Smalls in his old stomping ground that residents say has drastically changed.

"One day hopefully we could get that flavor back,” said John Hawkins, a resident who has lived in the neighborhood for 55 years. “We don’t have the block parties anymore – it’s not as free,  you know people at one time felt like they could express themselves artistically and its not that way anymore."

While remnants of the late Notorious B.I.G. are few and far between in his old neighborhood – one still remains. Any fan out there probably recognizes the Bedford Avenue grocery store front  – its where Biggie delivered one of his most iconic freestyles and it still survives today thanks to YouTube.

Shot when he was only 17, it’s a freestyle that will give any fan goosebumps and according to DJ 50 Grand,  who produced Biggie’s first demo tape. It's one of the reasons why Biggie’s legacy has stayed intact.

“Music ain’t going nowhere, that’s the one thing he did,” he said. “A lot of rappers who putting out songs, the next year their album falls off and you don’t hear their music anymore but BIG still rocking after 19 years – that’s what’s so good about it.”