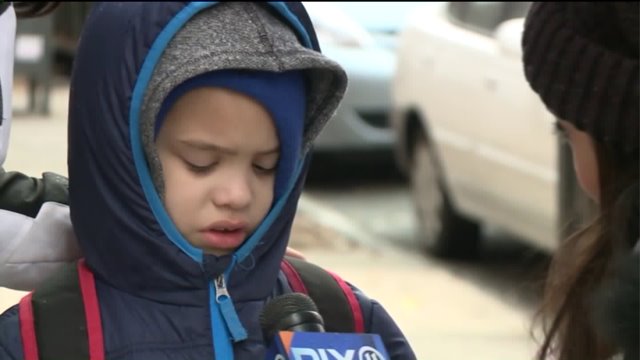 THE BRONX — A second grade student, who was severely bullied for years, said the NYC Department of Education gave her the run around and failed to answer her for months when she requested her son be switched to another school.

Cameron Suarez, 7, told PIX11 News he has become a target for bullies. He said he is harassed and tormented at P.S. 207 in the Bronx almost every day for years. Suarez is currently in second grade, but said he's been bullied since kindergarten.

His mother, Martell, said her only son suffered a concussion when he was pushed down a flight of stairs last year. Since then he's even been injured, jabbed repeatedly on his hands with pencils.

She said unfortunately, it didn't end there.

"He's gotten scratched, bit, punched. He had his head kicked to the floor. He had his pants ripped up to his knee. He had so many things done to him," Martell said.

"I've reached out to the assistant principal. I've gone to the precinct, I've called 311 and I've made complaints numerous times to the Board of Education," Martell said.

Martell acknowledges and is upfront about her son's health. He suffers from ADHD, a mood disorder and anxiety. He is in a special needs classroom with seven other children like him, but she believes it is the school's responsibility to keep Cameron safe when she can't.

Martell repeatedly asked for a safety transfer and yet, she said she got the run around and was directed even to the local precinct, to the department of education to right back to P.S. 207.

During the course of PIX11 News' report, there was a turn of events.

Martell told PIX11 News she received a phone call from her son's assistant principal Tuesday afternoon, who told her that the school finally has the safety transfer paperwork Martell requested months ago.

In the meantime, the NYC Department of Education said in a statement:

The safety and security of our students and staff is our top priority and we are continuing to work closely with the school to investigate and address the events that have been reported. Each school is expected to promote a nurturing culture that promotes positive interpersonal and intergroup relations and respect for diversity among students and between students and staff, providing all students with a supportive and safe environment in which to grow and thrive academically and socially.