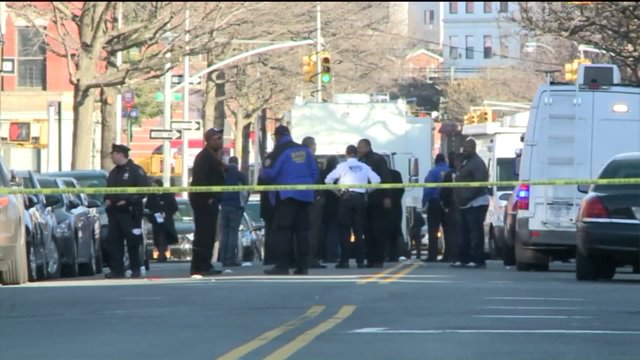 Retired NYPD Detective Paul Yurkiw, got the call at 3:45 a.m. Saturday that his 29-year-old son, Officer Andrew Yurkiw, had been hit by gunfire in Brooklyn and was saved by his bulletproof vest.  Nearly 27 years ago, Paul Yurkiw also dodged death, thanks to his police vest, after he was shot three times on the Van Wyck Expressway in Queens.

An NYPD highway car raced the older Yurkiw to Kings County Hospital from his home in Nassau County, where "I was just happy to see he was coherent and alert," Yurkiw said. Andrew, who was just married in June 2015 and on the job for four years, was worried about his partner, who was shot in the hip.

Paul Yurkiw knows how close his son came to a bad outcome.

"He's got a bruise the size of a grapefruit on his chest," Paul Yurkiw told PIX11 Investigates. "A .357 magnum is a devastating round. The penetration power is incredible," the retired detective noted.

"A few inches either way," Yurkiw said of the bullet, "it could have been a different story."

Yurkiw also told PIX 11 his son "is a big kid and he's in good shape."

PIX11 learned the bullet pierced the younger Yurkiw's skin and caused blunt trauma to his chest.  He was home resting Saturday afternoon, after his release from Kings County Hospital.

Yurkiw's father said his son loved his work in the 81st Precinct, assigned as a plainclothes officer in the anti-crime unit. His son had responded to a call of shots fired with his partner, pulling up behind the suspect's car and getting hit at close range during the gun battle that followed.

On June 21, 1989, Paul Yurkiw was driving on the Van Wyck Expressway in Queens, after leaving Brooklyn, when he noticed a car pulled over on the shoulder. He thought the vehicle was disabled and that the driver needed assistance.

It turned out the man inside the other car was a felon on parole from New Jersey state prison and he was counting up narcotics inside the vehicle. When Yurkiw got fairly close to the car, he told PIX11 the man got out and shot him. He was wearing a 10-ply police vest and got hit three times in the chest with a .38 caliber gun. Paul Yurkiw survived.

In his son's case, the firepower was stronger and, thankfully, Andrew Yurkiw's bulletproof vest was better.

PIX11 Investigates interviewed Andrew Yurkiw's father shortly after the Boston Marathon bombing in 2013.  Paul Yurkiw had a storied career with the NYPD Bomb Squad, after he survived the 1989 shooting.

In 1997, Paul Yurkiw -- outfitted in his special bomb squad gear -- defused four pipe bombs that were ready to be used in a subway bomb plot in Sunset Park, Brooklyn.

The bombs were already in backpacks, ready to be activated, when a roommate of the two suspects ran from the house and notified police about the terror plot. The suspects were shot in a gun battle, survived, and later convicted.

Paul Yurkiw told PIX11 the focus should not be on him now but, instead, on his son and his partner. Yurkiw is grateful for their survival.

"You don't plan to get into a gunfight when you go to work," Yurkiw said. "This is a reality check."