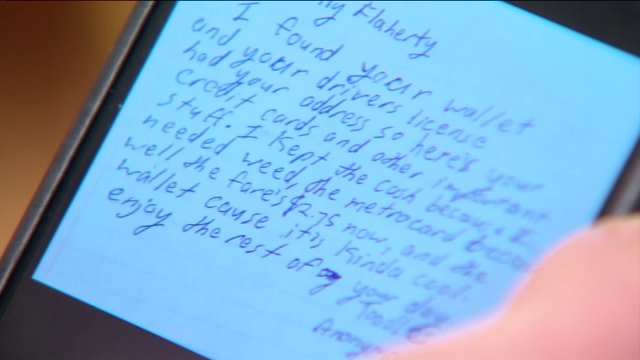 FLATBUSH, Brooklyn – The person who found a young man's wallet at King's Theater during a Wilco concert likely shares the same taste in music, fondness for the wallet and cold-hard cash.

After going to a concert in Brooklyn on the night of Feb. 5., Reilly Flaherty, 28, arrived to his Lower East Side apartment and realized his wallet was missing. In a freak-out moment, Flaherty took an Uber car back to King's Theater, but couldn't find his wallet.

He canceled his credit cards on the way back home and thought the story was over.  A week later, however, he received a letter from a quasi-Good Samaritan.  Inside the envelope he found his identification and some of his cards.

"Dear Reilly Flaherty, I found your wallet and your driver's license had your address so here's your credit cards and other important stuff. I kept the cash because I needed weed. The Metrocard because well the fare's $2.75 now and the wallet 'cause it kinda cool. Enjoy the rest of your day. Toodles, Anonymous."

Flaherty, upon reading the note, immediately associated this gesture with the "Breaking Bad" anti-hero Walter White – a cancer-stricken chemistry teacher who turns into a drug dealer – blurring the lines between good and evil.

"To be honest, I was thinking this person is the Walter White of wallet returning," Flaherty wrote to a friend. "They start out with seemingly good intentions, but then you quickly realize they're actually just a villain plagued with an insatiable appetite for MetroCard spending and marijuana-infused subway rides– hurting everyone they love around them. Sadly, this is the plot."

The currency doesn't matter, according to Flaherty.

"The fact is, there's a pot-smoking modern-day Robin Hood out there who knows my blood type, knows where I sleep at night," he joked. "So that's terrifying, frankly."