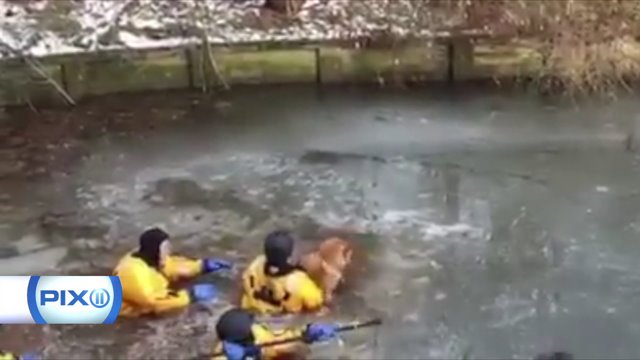 RESTON, Va. — This angel needed some help sprouting some wings.

A 75-pound Chow named Angel was about 10 to 15 feet offshore when she fell through the ice on Lake Thoreau in Reston, Va.

Rescuers arrived on scene to find the dog struggling to get out of the frigid water, as her owner watched from the shore.

Video posted on the Fairfax County Fire and Rescue Department's Facebook page, which is at times hard to watch, shows rescuers approaching the dog as she barked and cried.

Angel was out of the water in less than 10 minutes from the time fire crews got the call that she was in danger. She was evaluated by medics on the scene. She was very cold, but fortunately, not hurt.

Elsewhere, in University Park, Pa,, firefighters and Penn State Police worked together to lift a Golden Retriever named Skye out of a sinkhole.

A video of the rescue posted to Penn State's Twitter page showed Skye happily wagging her tail as firefighters pulled her out.