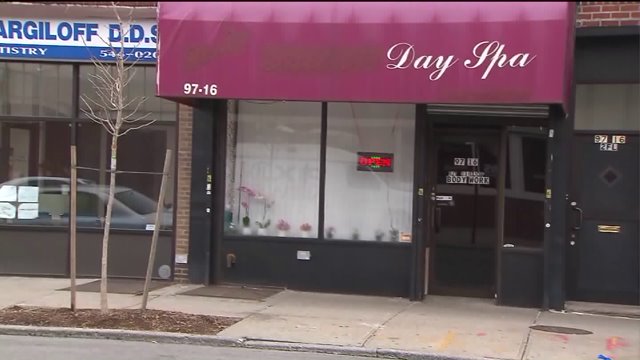 FOREST HILLS, Queens — Forest Hills residents are concerned about the surge of massage parlors popping up near their homes.

The concern comes after police arrested several women for prostitution.

"Thank God, there are solid walls but I don't know what's going down over there," said David Bryant, who works at On The Level Design,  next door to a massage parlor on Metropolitan Avenue. He said he's tired of bumping into parlor clients while heading to work.

"You got shady characters going in and out so it worries the whole neighborhood," Bryant said.

The parlor is one of many businesses that residents call questionable, especially after nearby business owners have seen a nonstop line of male customers.

About a block away at the parlor, police recently busted two women for prostitution during a sting.

The business was immediately deemed a nuisance abatement, giving the city the power to shut it down.  But neighbors say the open-for-business sign is back up.

"It's an abuse of women," said Kimberly Tromba, an Edible Arrangements franchise owner in the area.

She's been in the community for a decade and is right next door to a parlor, but she thinks her neighbors are not just selling sex, but possibly something worse.

"It also makes me wonder if this is human trafficking," said Tromba.

Police are cracking down on parlors citywide with the Organized Crime Control Bureau.

State lawmakers are considering a bill forcing building owners to verify a parlor license before renting out a space.