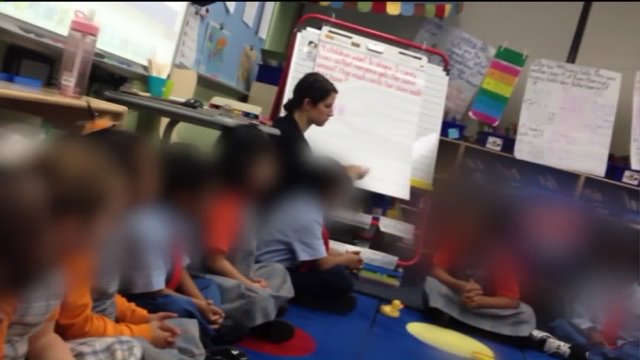 COBBLE HILL, Brooklyn -- Disturbing video of a teacher berating her first-grade student and tearing up her worksheet is raising new questions about Success Academy.

Hidden camera video recorded of one teacher during Number Stories has provoked a strong reaction among many viewers because of its intense, demeaning and abusive nature.

"Count," teacher Charlotte Dial orders a girl in her class, captured on the surreptitiously recorded video.

When the first grader can't perform as expected in the verbal group math exercise, Dial rips up a worksheet that the girl had completed for the project, in front of the girl and her classmates, and yells, "Go to the calm-down chair and sit! There's nothing that infuriates me more than when you don't do what's on your paper!"

The teacher then addresses the rest of the class. "Somebody come up and show me how she should have counted to get her answer that was one in a split."

Another child is then seen in the video providing the correct answer, to which Ms. Dial then says, to the girl she has punished, "Do not go back to your seat and show me one thing, and then don't do it here. You're confusing everybody."

The video was recorded by an assistant teacher who has since left the school. She wants to remain anonymous, but told PIX11 News that she'd made the recording because she was tired of seeing the kind of behavior in which she'd recorded Dial engaged.

The assistant teacher said that that sort of interaction with students would happen every time there was a Number Stories exercise in their classroom. Charlotte Dial is regarded by the Success Academy Charter School network as a model teacher for the whole school network.

On Friday, Success Academy arranged a pep rally-style news conference at its headquarters on Wall Street in response to the video surfacing. There, Charlotte Dial stood at the front of dozens upon dozens of principals, teachers and parents, called together for the event about the video, which had initially aired on the New York Times website. The news conference condemned the Times, but did not have Dial say anything.

"This has been very challenging for Dial. She is not a public figure. I am."

Moskowitz, along with one after another hand-picked speaker at the news conference, condemned the teacher's behavior in the video. They then praised Dial's work and reputation.

Moskowitz also pointed out that Dial had been suspended while Success Academy looked into the incident.

It ordered a week of additional training for Dial, who, according to Moskowitz, also apologized to all of the students in the class, as well as to their families, once the video surfaced. It had been recorded in the fall of 2014 by the assistant teacher, who turned it over to the New York Times last November, after the assistant teacher decided to leave the Success Academy system.

Success Academy later promoted Dial to be a trainer of other teachers.

"We're all human," said Moskowitz. "And we all have emotions.

"I am not going to throw Charlotte Dial under the bus," Moskowitz continued. "She has helped hundreds of children thrive and be successful."

However, the assistant teacher who recorded the video told PIX11 News that it was one of multiple videos she'd recorded of Dial interacting abusively with students. She said that Dial's behavior was typically abrasive with students, and that it was not discouraged by the Success Academy Cobble Hill principal.

The assistant teacher said that she'd recorded the videos out of concern that she would be fired after she'd complained about Dial being abusive to the children they were entrusted to teach.

Other former Success Academy parents told PIX11 News that they'd removed their children from their Success Academy schools because the children had experienced similarly shaming and humiliating behavior from teachers.

"This is... the harsh tone of them trying to reconstruct the children," said Shanice Givens, who withdrew her child from Success Academy Fort Greene, Brooklyn, two years ago, after information leaked that the school had a "Got to Go" list of students deemed problematic by the administration.

The principal of that school, Candido Brown, gave a weepy apology at a news conference last October, in contrast to Charlotte Dial at the news conference/rally on Friday. She shed tears openly, more than once, but never spoke.

Givens, the mother whose child's name was found on the "Got to Go" list, said that at her son's school, harsh tactics like those seen in the video were used regularly by an administration intent "on breaking [students] down, and having them do what [administrators and teachers] want."

Givens is one of a group of parents suing Success Academy, who say that intimidation of students is part of the reason behind their actions.

Karen Sprowal is one of the parents as well.

"When I look at the teacher," she said about the video, "I see a teacher who's not a bad teacher, but a teacher who's working within what's being instructed for her to do."

In response to such complaints, Moskowitz said on Friday, "We had, I don't know, a combined total of 25 parents who filed lawsuits or go to the press. I don't see how that's representative of 11,000 families [in the Success Academy system], plus 20,000 on the waiting list, plus the 20,000 that applied."

Success Academy did not respond to a request by PIX11 News for statistics showing how many of its accepted students had left the system in its 10 year history.

It did provide a recording it made of a New York Times reporter interviewing parents of children who'd had Ms. Dial as a teacher. The parents had been selected by the school. Their reviews were universally favorable.