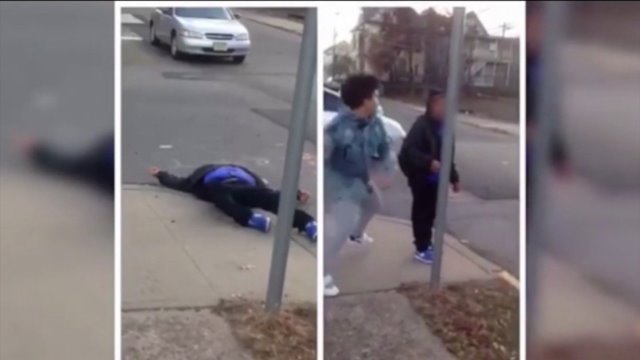 PATERSON, N.J. — One teenager is in custody and another remains on the loose in connection with a December knockout-game attack that only surfaced online last week.

Paterson Police became aware of the Dec. 7 attack after a video was posted to Facebook on Thursday.

The video shows a teen punching an elderly man who was getting ready to cross Rosa Parks Boulevard from Van Houten Street.

After an investigation, the assailant has been identified and petitions have been signed against him for aggravated assault and endangering an injured victim. He is being sought by police.

A second juvenile filmed the assault and is heard encouraging the aggressor. He has also been identified and is charged with aggravated assault and endangering an injured victim. This teen turned himself in to the Paterson Police Department on Saturday.

Both teens live in Paterson.

"This shameless act of violence was thoroughly investigated and the tireless efforts by the detectives involved is commendable."

"No stone was left unturned in identifying those responsible."

"The juvenile at large will continue to be sought with the same tenacity and will face swift and decisive justice for this senseless act of violence."

Anyone with any information on the whereabouts of the assailant is asked to please contact the Paterson Police Department immediately.