Cause of massive Williamsburg warehouse fire discovered one year later 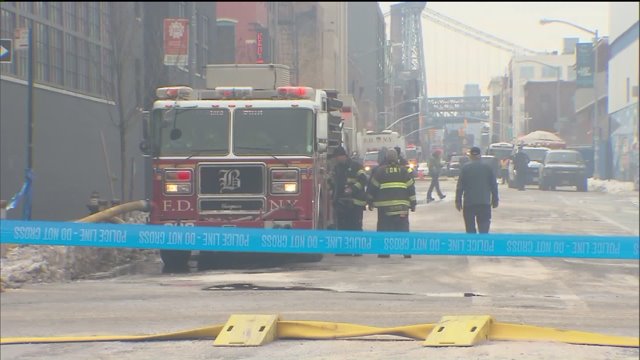 WILLIAMSBURG, Brooklyn– More than a year after a massive fire at a Williamsburg warehouse, we're learning more about how it started and why Firefighters had to return to the scene twice.

The FDNY says a light fixture was responsible for the massive fire last January. The sparks likely caused cardboard below to catch fire.

But, according to the report, the smoldering embers from that fire which started just before 4:30 AM on January 31st of 2015, reignited about two hours later starting a 7-alarm blaze.

Some don't understand why it took so long to get the reports.

"From a common sense standpoint, why it took a year to write basically two paragraphs in a very general way raises eyebrows," said Steve Chesler of the group Friends of Bushwick Inlet Park.

A year later there are multiple pending lawsuits surrounding the incident. The parties involved had little to say about the reports— but, Recall Holdings, whose insurance company is suing the city, said,

“Recall understands the sensitive nature of this issue, however, we cannot comment at this time, as it is an ongoing legal matter. As we were when the incident occurred, Recall is pleased that no one was injured, and our top priority is focusing on the support of our customers."

The new reports will likely play a role in the lawsuit against the city.  If Recall wins, taxpayers would be on hook to foot the bill.

The fire also reignited Chesler and his group. Now they're pushing the city on a decade old promise to buy the property and use it to build a public park.

"Soon after the fire happened, the owner started aggressively selling the property," said Chesler.  "And that was kind of a call to arms, because there's really nothing preventing him from doing that."

The deal was made in exchange for lighter zoning restrictions that allowed high-rise construction on the waterfront.

Now between the pending lawsuits, and the city voting down rezoning, the property location may have lost some of it's luster. So, Chesler and his group are hoping the city will use the opportunity to step up and fulfill its promise.

"We'd really like something more aggressive in terms of the city moving forward and doing whatever it takes to acquire the land."

The FDNY does plan to release another more detailed report in the future— but there is no word yet on when that report will be released.