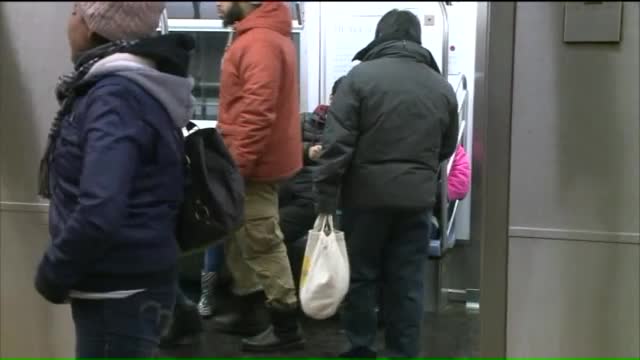 NEW YORK — Sleepy straphangers are being told to wake up -- or else.

Police Commissioner William Bratton said Wednesday that more officers will be sent into the transit system to make sure riders are staying awake. That includes waking up people who are napping on the train.

“We believe almost 50 percent of the crime in the subway involves sleeping passengers,” Bratton said. “If you’re sleeping, you might lose your wallet or your iPhone, you might be the subject of a sexual assault, so why put yourself at that risk?”

He said that while New Yorkers may be tired when they get off work, "subways are not for sleeping" -- and a transit snooze puts riders at risk.

But critics said the move is a "band aid."

"Waking sleeping passengers on a train is an attempt to conceal the fact that we don’t have enough police officers. Those who prey on sleeping passengers - what we call lushworkers - do so over and over again and there simply aren’t enough officers assigned in the Transit Bureau to keep them in check," Police Benevolent Association head Pat Lynch said in a statement Thursday.

"The NYPD is understaffed and temporarily taking resources from other functions and putting them in the subway is a band aid approach and not a real solution."

Self-defense expert and former NYPD Officer Frank Drake explained there are other precautions straphangers can take to keep themselves safe in the subway.

Drake said if a rider spots someone with a knife or a box cutter, “you want to stay as far apart from them as you can. You are better off creating distance.”

He also suggested moving away from riders who are arguing.

"Generally you should not get involved because you may find that people who are arguing with each other, now direct their anger towards you,"  Drake said. "And instead of being a Good Samaritan, you’re now a victim.”