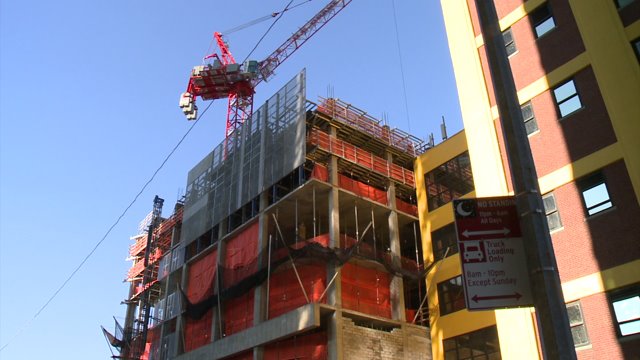 NEW YORK -- A serious construction accident on Wednesday was a dangerous reminder of some of the hazards of New York's construction boom.

Many construction workers are calling the boom a bust for them personally, particularly when it comes to their pay and their safety.

"Crushed fingers, broken fingers," construction worker Carrol Turner said, describing some of the injuries he's sustained over his last 13 years of work. "Falling down a whole floor, that occurred to me."

"From hard hats to gloves, to welding masks," she told PIX11 News, "I had to buy all of it on my own. I suffered an injury to my eye, welding. I'm not a welder by trade, I was made [by my bosses] to weld."

Workers' problems like hers appear to be on the rise as New York area work sites have multiplied in the current building boom. Along with the increased number of projects has been an increase in incidents like the one near Union Square at 8:45 a.m. Wednesday morning.

In that case, a worker fell four stories, impaling himself on rebar in three different parts of his body. He was transported in critical condition, but his condition has been upgraded to serious.

His coworkers at the construction site at 34 West 17th Street site were concerned when PIX11 News was on scene documenting the emergency, but they but did not want to comment or have their pictures taken.

"Most of the workers, my coworkers," said iron worker Carrol Turner, "are undocumented." He said that they won't complain for fear of deportation."

The developers of the site, Atkins & Breskin Co., did not return a call by PIX11 seeking comment.

Their worksite is not a union-run location, and the city's biggest advocate of union construction reacted strongly when he heard of this latest danger.

"Here we are the third or fourth week of January," said Gary La Barbera, "and here we go again" with an accident that could cause "death or severe injury," La Barbera said.

He is the president of the Building and Construction Trades Council of Greater New York. It's a coalition of construction unions, so La Barbera clearly has a bias in favor of union labor. However, he said that the facts speak for themselves, most particularly the 16 construction deaths the city experienced last year.

La Barbera said that the key to saving lives is to require contractors to train all workers, both union and non-union, in safety procedures. "When they go to work," La Barbera said, they'll be able to "stand up and say no" to a situation in which they could "lose their life or a limb."

He said that the Manhattan borough president, Gale Brewer, was joining with members of the New York City Council to get legislation passed this year to require apprentice-level safety training at all city construction sites.

Meanwhile, the safety complaints made in this story were against the contractor U.S. Crane. PIX11 contacted the company more than once, seeking a response. Each time, the answer was similar. "I'm sorry, we have nothing to say. 'Bye," said one of the people who answered the phone.

Workers told PIX11 News that they were sometimes paid as little as $12 per hour. The current city minimum wage for fast food workers is $10.50.