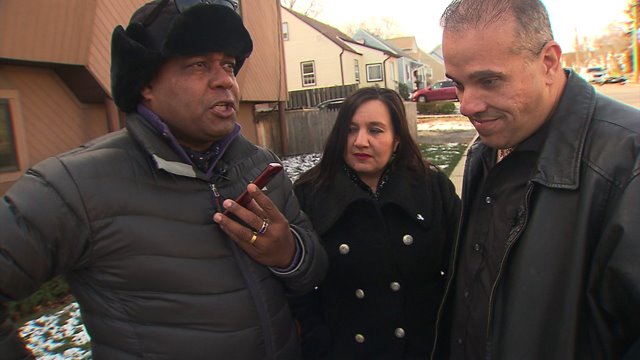 WOODBRIDGE, N.J. — Carlo Bellario is a stand up comic and aspiring actor. He’s got a role now that’s no joke.  He’s a defendant in a gun case stemming from a movie shoot he did in Woodbridge.

Carlo says he responded to a Facebook posting to play a gangster role in a film called Vendetta Games.  It’s a low budget production by a filmmaker named Andre Joseph and his Epyx Productions.

Carlo got the part.  No pay, just an acting credit. And, as it turns out, the possibility that he could do 5-10 years behind bars.  All because of a shoot back in November.  Carlo described it to me.

“Our scene was a simulated car chase scene. We just drove around the neighborhood. I’m pretending I’m shooting with the recoil, with a pellet gun. I guess people in the neighborhood saw that. They call the police. We get back and we’re surrounded by cop cars!”

Carlo told the police he was an actor and it was just a film.  But he had no permit for the gun.

New Jersey has one of the toughest gun control laws in the country.  Even a bb gun is treated like a real weapon under the Graves Act, a bill named after former State Senator and Paterson mayor Frank Graves.

“Now because of that I’m looking at 5 years because it’s a second degree crime. 5 to 10 years actually.”

The film producers bailed on him instead of bailing him out. Carlo spent 4 days in the Middlesex County jail while his girlfriend tried to round up the money.

I tried calling producer Andre Joseph.  He never got back to me.

We spoke with New Jersey criminal defense attorney Tim Farrow who has some expertise with the state gun laws.  He told us that the New Jersey Attorney General recently issued relaxed sentencing guidelines for gun crimes.  So there’s a chance that Carlo may be spared a draconian sentence under the Graves Act.

As for Carlo, he can’t afford a defense attorney.  So he’s started a GoFundMe page.

“I owe money to the bail bondsman. Gotta see this guy every week. I can’t leave the state to do gigs. I can’t afford an attorney…I’m so embarrassed by this.”

We’ll stay on this story and let you know what happens to Carlo Bellario.