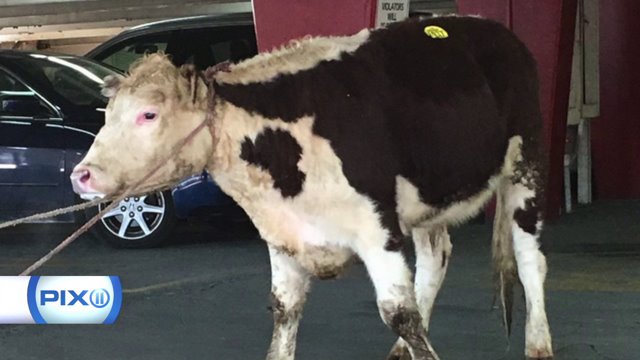 NEW JERSEY – A cow that dodged almost certain death in a Jamaica, Queens slaughterhouse will not be sent back to his doom.

'Freddie' is now in the care of Skylands Animal Sanctuary and Rescue in Wantage, New Jersey after being saved by an animal rights activist.

"I was able to get the owner (of Archer Halal Live Poultry) on the phone right away and at first he was pretty receptive," Stura, who works with Skylands, told the New York Daily News.  "But he said the animal was promised to a family that had some big event coming up and he would call them."

Stura says he slept in his truck that night and began talking to the employees early Friday, finally convincing the owner to release Freddie, who he loaded into his trailer.

Video showed Freddie charging down a Queens street Thursday, finally bolting into nearby Jamaica First Parking where he was eventually lassoed.

Freddie is now in a stable at the New Jersey sanctuary's 230-acre property awaiting his visit to the veterinarian.  News of the cow's rescue inspired thousands of excited comments, including multiple offers to buy Freddie.

Anyone interested in helping pay for Freddie's care and ongoing costs can visit the Skylands Animal Sanctuary site.